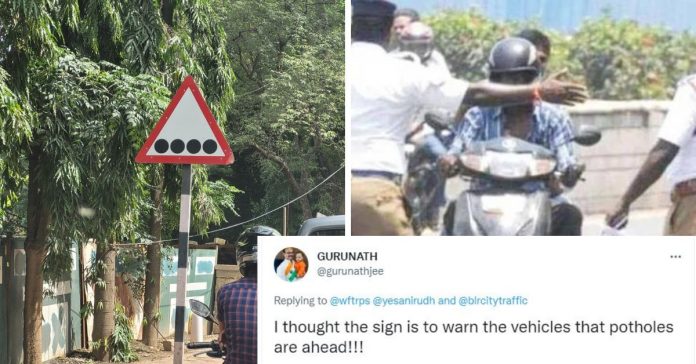 A commuter asked about a new traffic sign on Bengaluru roads and cops explained him in detail. Later, many users agreed that they too did not know the meaning behind that traffic sign and thanked the police for explaining it.

One Twitter user spotted an unusual road sign in Bengaluru and shared a picture on social media, and tagged the police Twitter handle, to clear the doubts. Later, Bengaluru Traffic Police responded to the tweet and clarified road signs and safety.

A Twitter handle belonging to one Aniruddha Mukharjee spotted the sign – four black dots on a white background. The curious commuter clicked a picture and tweeted, tagging the traffic police, “What traffic symbol is this? @wftrps @blrcitytraffic. This is put up just before Hopefarm signal!”

In a quick response, the Whitefield area traffic police revealed the meaning of the sign on the road adding that it has been adopted in the interests of blind people to ensure their safety on roads. Noting that there is a blind school at Hopefarm Junction at the location, the tweet said that the traffic board is a cautionary sign board which indicates that a blind person can be present on the road and therefore commuters need to exercise caution while driving.

Dear Sir,
That is a Cautionary sign board which tells about a possible blind person likely on the road. Exercise caution while driving.
There is a blind school at hopefarm junction where this board is placed.
Regards

Following the traffic police’s response, many took to the comment section and lauded the move. While one user said, “didn’t know this. Thanks for educating us”, another one wrote, “Thanks for informing. I was not knowing.”

Another tweet stated, “Awesome I guess time for @blrcitytraffic to share some light on traffic signs daily on Twitter and other rules around it. Will help us educate further, wrote another netizen.

Sir, That's great that you put a sign there but that is not explanatory. Please look into the suggestions in other tweets.

Thank you for all the good work ☺️ pic.twitter.com/3sPl5fPnOs

I thought the sign is to warn the vehicles that potholes are ahead!!!

Awesome I guess time for @blrcitytraffic to share some light on traffic signs daily on twitter and other rules around it. Will help us educate further.

Thanks for informing.I was not knowing

Normally a Visually Handicapped person is shown a white cane. The sign of White Cane on Zebra Crossing could have been more appropriate.

@anandmahindra Thank you sir by lightning a candle darkness ends, Hope other states transport department do the same and make blind people feel they are one of us @uptrafficpolice @upsrtc_lko

City Life karthikrocks36 - August 4, 2022
Light to moderate rain for a couple of days caused traffic jams in many parts of Bengaluru, besides flooding several low-lying areas like Horamavu...