MetroSaga
Home News Kangana Drags Hrithik Into The SSR Case, Says Her Relationship With Him... 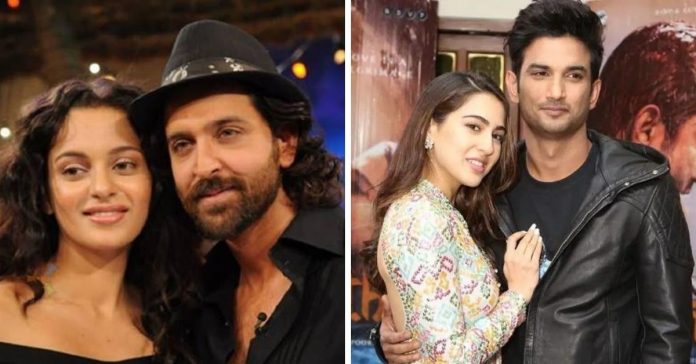 Reacting to the new angle in the Sushant Singh Rajput’s death, Kangana Ranaut took to Twitter to compare it with her life. In the tweet, she wrote,

“I believe Sara must’ve loved him he wasn’t a fool to fall for a girl whose affection isn’t genuine but she must have been under pressure. What I shared with Hrithik was genuine at that point, I still have no doubts about it. Why suddenly he became so hostile is still a mystery to me.” Samuel Haokip, Sushant’s friend, spoke to ETimes in a long interview where he revealed certain details about the relationship between Sara Ali Khan and Sushant Singh Rajput. Talking about their relationship, he said,

“During my time, Sara and Sushant had broken up, and then Rhea had come in his life. So I always felt that he shared a slightly better bond with Sara. They used to share poetry with each other and seeing them together felt like watching a movie. Even when both of them were trying to have fun together or flirt with each other, they were very respectful to one another as they knew that there were people around them.”

Kangana also took a dig at star kids and said,

“News of SSR and Sara affair was all over the media, apparently they were even sharing a room during their outdoor, why these fancy nepotism kids show dreams to vulnerable outsiders and then publicly dump them? No wonder he fell for a vulture post that.”