The Government of Karnataka recently honored eight government servants who work in different departments across Bengaluru with the “Seva Samman” awards. These people were honored for their dedication and commitment towards making the city a better place to live.

Archana DS made headlines when she breastfed an abandoned baby rescued by the police. Thus, she went beyond her regular duty as a constable and showed a very rare humanely side. The baby was brought to the police station after it was discharged from the hospital post-primary care.

When all the efforts of the policemen to calm the wailing baby did not work, the native of Madhugiri, Tumkur who had just joined her duty after maternity leave, carried the baby and fed. Immediately the baby stopped crying.  The men in Khaki have named the baby Kumaraswamy on the name of the current CM of Karnataka. Over the years, this teacher at Uttarahalli’s Government High School has performed many tasks in his career of spreading education. His decision to create classrooms for the students who were until then studying under the trees encouraged the locals to give the school land of five guntas for further development.

From mobilizing furniture, land, to arranging infrastructure for the school and going door-to-door in Uttarahalli to convince women to send their children to school, Chikkadeve Gowda indeed went much beyond his regular task as assistant teacher. Mahesh is a 38-year-old employee of BBMP who played a major role in helping the Manchanakyakanahalli Gram Panchayat get the “Nirmala Graama Puraskar,” from the Union Government for achieving the open defecation free status.

This junior health inspector from Hosadoddi, Magadi taluk ensured that the lessons of water segregation were imparted to children studying in both private and BBMP schools when he was deployed in the BBMP’s Vasnthpura ward. Every month his few mornings are dedicated to traveling with pourakarmikas and teaching people the methods of water segregation by approaching them door-to-door. YN Gangadhar revealed his strength as a gentle human being when he stopped at the site of an accident and drove an injured policeman lying helpless amidst the chaos of the crowd with the help of his conductor to the nearest hospital in his bus. This 30-year-old driver of BMTC waited till the family of the injured policeman arrived. The motto of this life-saving hero is “Duty first. But saving a life is much more important.” 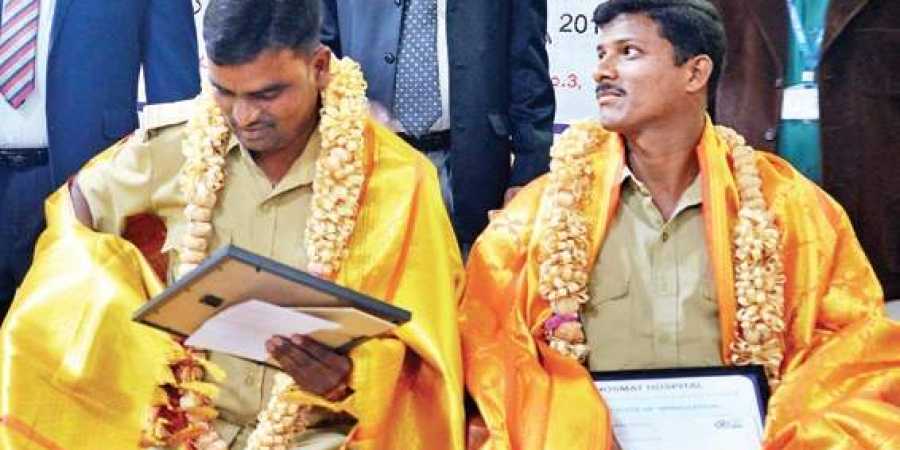 This native of Madikeri took up the task of representing the police force of Bengaluru online. He has been the man who has driven the rapid growth of city police on social media platforms. Leading a team of 14 members, Lokesh worked as a coordinator to create a history with the social media posts earning national attention and praise. The posts and memes always reflect the latest news and current developments. 57-year-old Narayanamma has been keeping the streets clean for more than 26 years and still does the same every morning. Interestingly, she is loved and praised in the neighborhood where she has been working since such long years. Once when she was transferred to another area, the residents came together and demanded BBMP to transfer her back to her original area.

She is an expert in waste management despite lacking a formal education. Narayanamma says, “I am eating proper meals because of my work and I am proud of it. We must keep the city clean like we keep our homes clean.” This government school headmaster in Immadihalli has always been concerned about the students who come to his school. Since he joined the school in 2012 he has tried to provide financial support and until now have managed to bring in Rs.1.5 crore for the government school with help from NGOs.

He provided 360 solar lamps for students of 10th standard. Last year 10 students from his school were adopted by corporates which ensured that they get to study in prestigious institutes. Srinivas T is the same conductor who aided Gangadhar when a policeman lay injured on the streets. This conductor from Shikaripura in Shivamogga is the resident of Nelamangala, Bengaluru and worked as major support when Gangadhar rescued the police constable on that fateful evening.

Bengaluru: BBMP Gets A New Commissioner But Twitterati is Not Happy With the Move