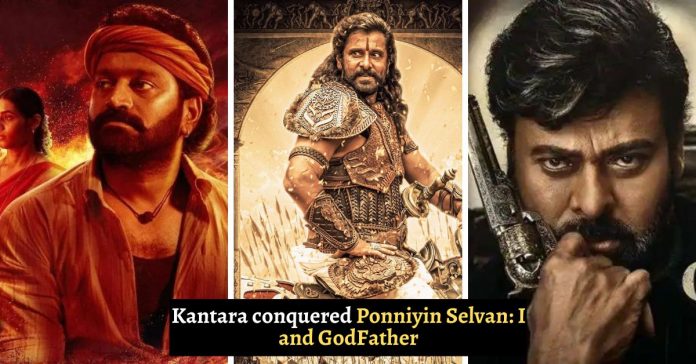 Rishab Shetty’s action thriller Kannada film has grown by word of mouth to defeat Ponniyin Selvan: I and GodFather as the number one choice of cinemagoers across India.

Kantara on a dream run

Rishabh Shetty’s directional Kantara is having a dream run at the box office. In Karnataka, the film has grossed Rs 58 crore since its release and is being dubbed and released in Hindi, Malayalam, Tamil, and Telugu following the tremendous response from audiences. On Tuesday, the film achieved a considerable feat as its national collections on the day surpassed those of blockbuster Ponniyin Selvan: I and Chiranjeevi’s GodFather, reported Hindustan Times. As per trade analysts, the Kannada film has earned Rs 80+ crore gross worldwide. On Tuesday, it earned around Rs 5 crore nett domestically. In comparison, Mani Ratnam’s Tamil magnum opus Ponniyin Selvan: I earned around Rs 4 crore in all languages while GodFather, the Telugu action thriller, netted just around Rs 2 crore. This made Kantara the number-one film at the box office on the day. Trade analyst Trinath said that the film has done fantastic business at the Karnataka box office. “In 11 days since its release, the film grossed approximately Rs 58 cr in Karnataka. In the limited number of theatres, it released in other states, most of the shows are going houseful, and theatre owners are slowly adding more shows. With the film ready for its dubbed release in Hindi, Tamil, Malayalam, and Telugu, it’s set for a huge box office onslaught,” Trinath said. To be noted: Kantara was released alongside Mani Ratnam’s magnum opus Ponniyin Selvan 1 and still managed to do extremely well at the ticket window. “PS 1 had a grand release in Karnataka with over 600 shows in its opening weekend. Despite the film doing extremely well in the state, it didn’t affect the earnings of Kantara at the box office which made a solid impact with its content. The folklore element in Kantara was one of the major crowd-pulling highlights,” Trinath added. Also, Kantara is now the third highest grosser of the year in Karnataka after KGF 2 (Rs. 171.50 crores) and RRR (Rs. 86 crores), it will be crossing the latter in either the third week or fourth weekend. The way the film is running, Rs. 100 crores plus seems like a very likely target. For reaching the three-digit mark, the film needs to stay above Rs. 20 crores in the third week, which going by how weekdays are performing, shouldn’t be a big issue.