Bengaluru-based engineer Prakash Hosadurga have come up with an innovation that can ease the burden of pourakarmikas. Distressed by the view of pourkarmikas sweeping the streets and carrying the waste-laden carts, the mechanical engineer decided to devise a smart machine iCleanX that not only sweeps the roads using the broom attached to it but also transfers the wastes to the cart.

The machine requires minimal manual intervention which is restricted to pushing the cart. It was first used for cleaning station by BMTC in 2018 and later on in Lalbagh and Hubballi-Dharwad municipal corporation in Bengaluru. iCleanX has been devised under the Triangle Innovations, a startup by Prakash who has previously worked in the corporate companies in the US and India.

The weight of iCleanX is 27 kg and it can be used at a stretch up to 5km a day. Its trash storing capacity is 45 liters. Prakash Hosadurga created this machine to clear the dirt on the road without having the laborer to lift or clear it himself. The iCleanX machines are being used by Lalbagh botanical garden since last two months.

The Deputy Director of Lalbagh, MR Chandrashekhar said, “We’re using them on tar roads inside Lalbagh. While the machine is good to pick up dust and clean roads, it can’t be used if there is stagnant water as it sucks everything on the road. It’s useful on a dry road surface.”

Until Now 50 Smart Machines Have Been Sold

Wife Of Prakash, Anjali Prakash said that until now the company has sold 50 machines including nine machines sold to Belagavi municipal corporation and three to the Hubballi-Dharwad civic body. Anjali, who currently works with an MNC said, “To be an entrepreneur was his dream and I supported the cause. All his savings have been used for his innovations.”

At present, the machine does not have the ability to segregate wet and dry waste. However, Prakash is planning to bring that change in further innovation. Incidentally, BBMP is yet to start using the machine even though it was demonstrated in front of the authorities in November 2018.

BBMP did not take it forward because the officials expected Prakash to clean one road in Bengaluru hiring manpower. Prakash said, “ I felt there were too many glitches. Our focus was to make the city use the machine and let pourakarmikas handle waste in a hygienic way. As an entrepreneur, my focus is to develop machines and not hire manpower to clean streets. Hence, we are still not able to work with the BBMP.”

On the other hand, the special commissioner, solid waste management BBMP, Randeep D said that they are interested in buying this innovative smart machine by Prakash.

Randeep D added, “I’m not aware of the communication between him and our staff. We don’t expect an innovator to sweep roads. This could be a miscommunication. We’re still interested in buying the machine that can help us in cleaning small roads. To begin with, we’ll buy three machines and I’ll look into the matter.” 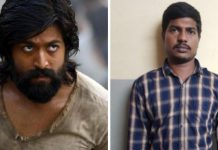 Bengaluru Likely To Get Heavy Rainfall On Friday; Scattered Thunderstorms To...

Head to Subbamma Angadi for Bits and Bites of History, And...

21 Damn Good Signs You Are Single AF In Your Life...