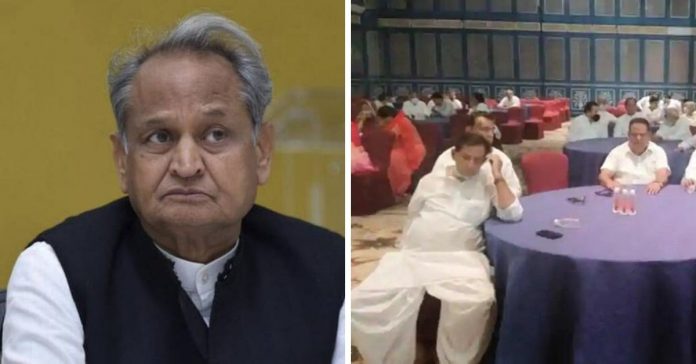 In the midst of the Rajasthan crisis, many Congress legislators who are supporting the Chief Minister Ashok Gehlot have been placed in a hotel in the outskirts of the state capital of Jaipur.

More than 100-plus legislators who are supporting Ashok Gehlot in the political crisis that is torn between the Chief Minister and the former deputy chief minister Sachin Pilot have been shifted to Hotel Fairmont on the 13th of July. This is to keep them away from the pressure of politics which could jeopardize the survival of the government.

The legislators have been spending time watching movies, attending cooking classes, and also playing antakshari. Some are even playing a music room in a luxurious hotel. A video has been viral where the legislators are seen singing the popular Hindi song called ‘Hum Honge Kamyaab’. Reportedly, this is supposed to be a sign of solidarity of them with Chief Minister Ashok Gehlot. Prior to the singing, the legislators apparently watched the Dilip-Kumar and Madhubala-s epic Mughal-e-Azam, Sholay, and Aamir Khan’s epic film Lagaan. Following this, the Bharatiya Janata Party spokesperson, Sambit Patra, took a jibe at the Congress MLA. He said that the Congress MLAs neglecting the people of their constituencies during a pandemic instead are watching movies and learning how to make pizza.

The Congress had recently accused the BJP of indulging in horse-trading in order to weaken the Ashok Gehlot-led Rajasthan government. The BJP has denied all the allegations. The turmoil in the Rajasthan’s political system continues to stay grim as differences between Sachin Pilot and Ashok Gehlot is only widening with each passing day. Pilot was sacked from the post of Rajasthan deputy chief minister and the state unit president. The leader and his 18 MLAs who are supporting him have been issued disqualification notices by the speaker.

In A New Twist, MP Alleges That Vasundhara Raje Is Helping The Ashok Gehlot Govt In Rajasthan