You’ve most probably heard of Cauvery Calling (if you’re a MetroSaga reader, you should have!) It’s a movement launched by Sadhguru, Founder, Isha Foundation, to revive river Cauvery, the source of drinking water for most of us Bengalureans.

We thought we’ll compile a list of quick facts about Cauvery Calling for you –this affects you directly, so it’s good to be in the know. What say?

1. Cauvery Calling kills at least two birds with one stone – well, maybe not the best of analogies, anyway…Cauvery Calling aims to revive the river and revive farmers’ fortunes as well. In the Cauvery basin alone, nearly 47,000 farmers have committed suicide in the last decade, so we’ll be all glad if this project can help farmers get out of their debt traps; after all, you and I eat because of them. If you want to know how Cauvery Calling proposes to do this, check their website. Most of us don’t even have access to a garden, forget a forest! But farmers in the Cauvery basin have farmlands, so this is the next best thing.

3. Agroforestry will be promoted on private farmlands, not on public land – hmmm, there’s been some confusion about this; some media reports claimed planting will be done on public land, so we’ve clarified this with the project team. Commercially valuable trees will be grown by farmers on their own farmlands, where farmers will also continue to grow crops. 4. The farmer has the right to choose whether or not he wants to enroll in the Cauvery Calling plan – this again, we’ve clarified with the team. There is no compulsion for anyone to switch to agroforestry. They can if they’re convinced that the model will earn them more revenue than what they’re earning now.
Fair and square.

5. This is a tried and tested model, not an experiment – tried and tested on 69,760 farmers in Tamil Nadu. Apparently, their incomes have risen from 300 to 800% in 3 to 5 years after adopting agroforestry – that’s some cool rise in income! Don’t you wish we could get these kinds of salary hikes!

6. They’re not random trees, the species are carefully selected – based on what? well, their commercial value for one because the farmer will harvest them and sell them; on their compatibility with the soil and climate conditions in the basin, for another, because saplings have to survive to grow into trees! 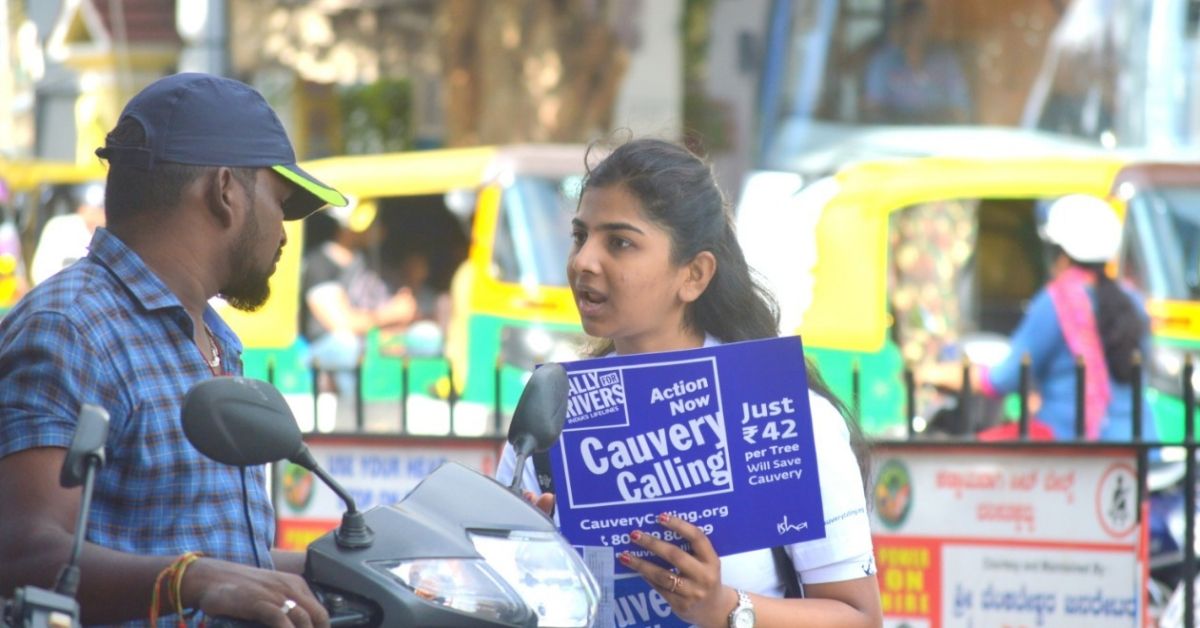 7. Saplings with 100% natural inputs will be raised in Isha nurseries – here’s another cool bit of info we got: The Isha nurseries are being renamed Mahatma Green India Mission to honor the Father of the Nation on his 150th birth anniversary.

8. The average cost of a sapling is Rs. 42 – and this is where you come in (if you want to). How 42? Why 42? Based on the several listed varieties of saplings (some high-value species cost more, others less) this is the average they’ve arrived at.

9. Local communities will be employed to raise saplings – and once they’re raised, Isha plans to buy them back and distribute them to farmers, so that’s one of the ways your contribution will help – in buying them back. And here’s a fun Cauvery Calling game if you want to play it.

So we’ve done our part for mother Cauvery, now over to you!

A New Parking Policy For Bengaluru! Get Ready To Pay Upto 5000 For Parking...

City Life Nesara V Jagannatha - February 11, 2021
The Directorate of Urban Land Transport (DULT) has framed a new parking policy which has been accepted by the Karnataka Urban Development Department. Drafted...

News Ria Ria - February 11, 2021
Once again dissing Twitter, Kangana Ranaut threatened to quit the microblogging platform. This time, she said that she wants to shift to Koo App instead.  This...

News Ria Ria - February 11, 2021
Actress Sonakshi Sinha on Wednesday extended support to the ongoing farmers' protest. Sonakshi posted a poem on Instagram, which she has recited and dedicated...

News Ria Ria - February 11, 2021
Back in 2017, actress Priyanka Chopra was brutally trolled for her spontaneous meeting with Prime Minister Narendra Modi in Berlin. The PM had taken some...

Such Divided, Confused Party Can Do No Good: PM Modi Slams Congress In Lok...

News Ria Ria - February 10, 2021
Ghulam Nabi Azad, outgoing Leader of the Opposition in the Rajya Sabha, is not a man given to expressing his emotions in public. But...

Come Out Of Slave Mentality: Under Attack, Kangana Asks ‘How Many National Or Padma...

Kangana Ranaut Claims That She Is Better Than Tom Cruise When It Comes To...

News Ria Ria - February 10, 2021
Kangana Ranaut is on fire when it comes to sensational statements and tweets. It was just today that she compared herself with Meryl Streep...