With almost 8000 guests attending the swearing-in ceremony of Prime Minister Narendra Modi on May 30 at 7 pm, the preparations are already on at the Rashtrapati Bhavan, the venue for the ceremony. Here are a few interesting things that you must know about one of the grandest events in the history of India:

Ashok Malik, the spokesperson at Rashtrapati Bhavan said, “The swearing-in ceremony will be of about 90 minutes and after that dinner will be served to around 40 dignitaries, including Vice President M Venkaiah Naidu and the Prime minister, besides leaders of all BIMSTEC [Bay of Bengal Initiative for Multi-Sectoral Technical and Economic Cooperation] countries.”

It is the biggest event ever held at Rashtrapati Bhavan. Prior to this 4000 to 5000 guests attended the earlier ceremonies and events. 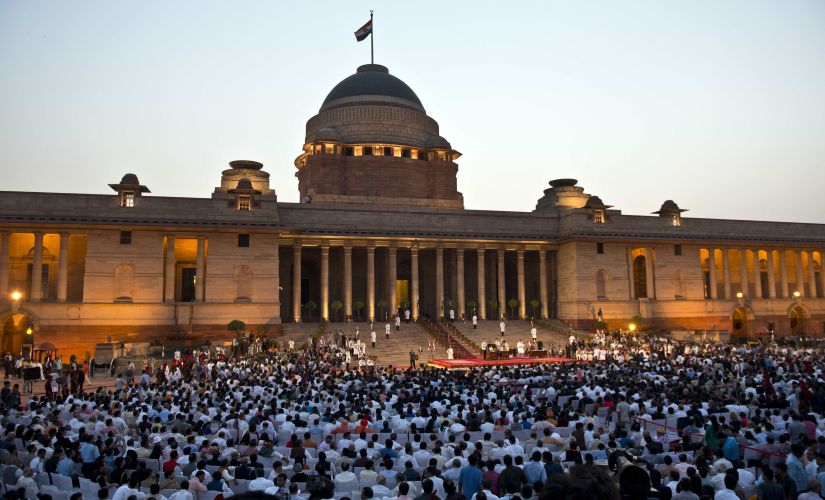 3. Snacks To Be Served After Ceremony

According  to the official, “There will be light snacks for the guests attending the swearing-in ceremony like Paneer Tikka.” Other varieties that the guests will be treated to include a variety of fruit and lemon tarts, samosas, sandwiches, and rajbhog for those with a sweet tooth. The snacks will be accompanied by high tea, coffee, and lemonade.

Adequate arrangements have been made for water on the premises and in the restrooms for the VVIPs and dignitaries.

The exclusive dinner to be served at Rashtrapati Bhavan after the ceremony will include a special ‘dal raisina’ prepared by the resident chef Montu Saini. This star dish will be served in its new avatar after infusing black lentils with Lucknow spices. It takes 48 hours to prepare this dish. But prior to that the chef and his staff will serve lemon coriander soup as the starter, palak and vegetable concoctions for the vegetarians and fish and chicken preparations for the non-vegetarian dignitaries.

As per reports, the 40 dignitaries invited for the dinner will include the newly appointed Prime Minister, Vice-President of India, foreign dignitaries, and envoys from foreign countries who have been invited by the President of India for this elaborate dinner.

5. Change In Timing And Seating Arrangement

In 2014, the swearing-in ceremony of Modi was organized at 6 pm but it was quite hot at that time which created quite a few problems. This time around the timing has been shifted to 7 pm so that guests do not face any discomfort during the ceremony. Also, this is only the fourth time that the ceremony is being held in the forecourt of Rashtrapati Bhavan.

Prior to that, it was a tradition to conduct the ceremony in the Durbar Hall. This time along the seating arrangement has also been elevated so that guests from the rear end can also get a good view of Modi when he takes the oath.

The Rashtrapati Bhavan has seen swearing-in ceremonies of leaders, witnessed the signing of historic pacts and heard the speeches of several world leaders.
https://t.co/Br7N1noiSx

Just ahead of the swearing-in ceremony, the Delhi Traffic Police has made elaborate security and traffic arrangements. According to reports, roads including Rajpath, Vijay Chowk, South and North Avenue, Church Road, and Daras-Shikoh road will remain closed to the public between 4 to 9 pm.

Here is a look at routes to avoid ahead of PM Modi's swearing-in ceremony.

The Delhi Police's traffic alert is due to movement of dignitaries around Rashtrapati Bhavan, where PM Modi will be sworn in pic.twitter.com/JW1cQKbtXy

Calling it an August celebration, the TMC leader has declined to attend the ceremony protesting against allegations of murdering 45 BJP workers. Many media experts believe that Mamata is politicizing the ceremony. 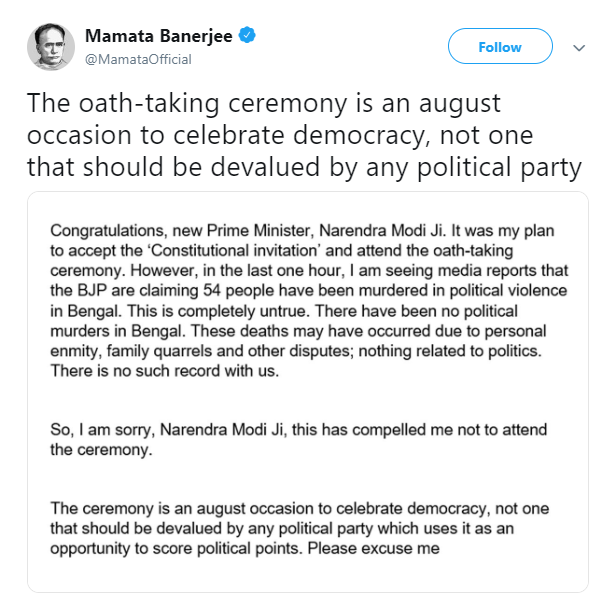 Soldiers from Siachen at -13*C have a message for us all Indians for the #ModiSwearingIn
A big day for India which will usher of New era in Indian politics, Jai Hind?? #ThursdayMotivation #ThursdayThoughts #ModiSarkar2 pic.twitter.com/tSRi7Vw0U7

Mann Ki Baat Highlights: India Knows How To Look In The Eye Of Enemy, PM Sends A Strong Message

Sacrifice Of Jawans Will Not Go In Vain, Narendra Modi Sends A Clear Message To China

News Ria Ria - July 17, 2020
As the novel coronavirus continues to spread around the world, scientists and researchers are scrambling to develop a vaccine to protect millions of people...

News Akarsh HP - July 17, 2020
On Friday, Rahul Gandhi released a video on his official account where he tried to explain the current geopolitical standoff between India and China. In...

Kannada Actor Jaggesh’s Reply to His Fan in A Typical Drone Pratap Style is...

News Nesara V Jagannatha - July 17, 2020
Actor Jaggesh, earlier today, interacted with a set of his followers on Instagram. To one of the normal questions asked by one of his...

Bengaluru To Extend Lockdown By A Week? BBMP Says It Needs More Time To...

City Life Akarsh HP - July 17, 2020
The city of Bengaluru has entered the fourth day of its week-long down but Bruhat Bengaluru Mahanagara Palike Mayor feels that the lockdown should...

News Ria Ria - July 17, 2020
Oxford University's coronavirus vaccine trial team is 'absolutely on track' and the vaccine could be available as early as September, David Carpenter, Chairman of the Berkshire Research Ethics...

City Life Akarsh HP - July 17, 2020
In March, when the Prime Minister announced a nationwide lockdown due to the novel coronavirus pandemic, a ton of restaurants, bars, and food outlets...

‘Not An Inch Of Our Land Can Be Taken Away’, Rajnath Singh Assures While...

News Akarsh HP - July 17, 2020
Union Defence Minister Rajnath Singh visited Ladak to interact with the troops delivered an assuring and a motivating speech to the troops. Speaking about the...

News Ria Ria - July 17, 2020
In a tragic development, Junaid Shah, a young Kashmiri model who was known for his resemblance to Bollywood actor Ranbir Kapoor, has passed away...

‘Find Me A Better Actor Than Alia And Ranbir’, Says R Balki While Talking...

Uncategorized Akarsh HP - July 17, 2020
Adding more to the nepotism debate which has gained mileage from the death of Sushant Singh Rajput, Bollywood producer, and filmmaker R Balki has...

In A New Twist, MP Alleges That Vasundhara Raje Is Helping The Ashok Gehlot...

News Akarsh HP - July 17, 2020
An MP of the ally party of the Bharatiya Janata Party has come out and revealed that former Chief Minister Vasundhara Raje is the...

News Ria Ria - July 17, 2020
Enthusiastically, US President, Donald Trump, announced that he wants to do everything possible to keep the peace for the people of India and China,...

White House Says India Has Carried Out 2nd Most COVID Tests In The World...

News Akarsh HP - July 17, 2020
Across the world, apart from the United States, India has conducted the highest number of tests with a record 12 million tests. The United...

Drone Pratap Exposed Himself Further: 10 Extra-Ordinary Things That Happened in His Latest Interview

News Akarsh HP - July 17, 2020
Prathap NM who is famously called Drone Pratap has been in the news for a while for faking his invention and innovation of building...

Bengaluru: 97% Of Corona Patients Put On Ventilator Have Died Here

City Life Nesara V Jagannatha - July 17, 2020
As per a shocking stat, as many as 97% of the COVID-19 patients who have been put on the ventilator at the Victoria Hospital...

News Akarsh HP - July 17, 2020
The latest update regarding the Sushant Singh Rajput suicide case is that Maharashtra Home Minister has denied the necessity for a CBI investigation. Since the...

News Ria Ria - July 16, 2020
In June the Delhi Government had its work cut out after an expert committee predicted that by the end of July there will be...

News Ria Ria - July 16, 2020
There is absolutely no change with respect to India's position on the Line of Actual Control, the Ministry of External Affairs said on Thursday,...

News Ria Ria - July 16, 2020
In June the Delhi Government had its work cut out after an expert committee predicted that by the end of July there will be...

Movies Nesara V Jagannatha - July 16, 2020
Shuddhi and Bhinna fame Adarsh Eshwarappa has written, directed and edited a short film, which is now streaming on YouTube. The short film was...

News Ria Ria - July 16, 2020
Actor Swara Bhasker in a new interview has said that audiences need to be held accountable for the success and failure of actors in the film...
Advertisements