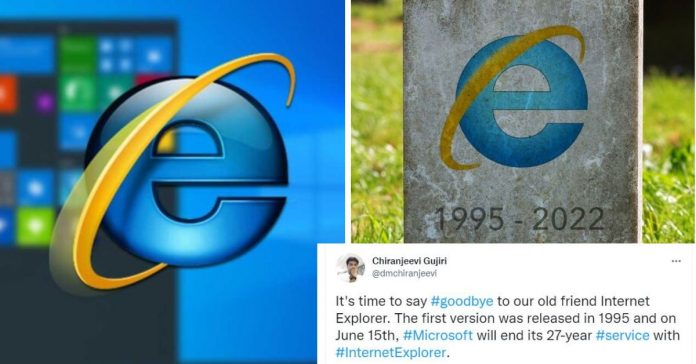 Microsoft has finally announced the retirement of its oldest browser, Internet Explorer after 27 years of service. It was first released in 1995 as part of the add-on package Plus! for Windows 95.

Microsoft has said that it will end mainstream support for the aging browser and it will finally retire in peace. As per the company information, Internet Explorer will be rendered unserviceable from June 15, 2022.

The reports claim that even after witnessing a huge peak with a usage of 95 percent share back in 2003, the browser was still not able to hold the position and the user base started declining drastically. The browser reportedly reached its peak in 2003 with around 95% usage share. But several new competitors came into the browser market with better user interfaces, better internet speed, and smooth performance. During its 27 years of service, Internet Explorer was unable to sustain the competition and slowly turned into a default explorer. Microsoft discontinued fresh feature development of the browser back in 2016 and it might be the first time the tech giant has chosen to phase out the Internet Explorer. Those who have used computers at home, schools, and offices in the 1990s and early 2000s will have fond memories of Internet Explorer. For millions around the world, the browser served as the first gateway to the world wide web.

After the news got announced, netizens started reacting on Twitter.

After 27 years of service, Microsoft is going to retire Internet Explorer for good on June 15th. pic.twitter.com/rIpcHFWoU3

Internet Explorer is shutting down in three days. I haven't used IE in a decades but it was the browser I had used for the majority if my childhood.

Whether you loved or hated Internet Explorer, it'll be the end if an era 💛

When you try to search something on Internet Explorer :- pic.twitter.com/fPsjP86k8E

They should have shut down atleast a decade ago pic.twitter.com/aGIlnVzzI1

After 27 years of service..

We only have 3 days left and say goodbye to #InternetExplorer forever because it will never be usable again. pic.twitter.com/zagosgb0Ct

Internet Explorer being discontinued is big enough news to warrant being featured on the train’s “pickup news” service! pic.twitter.com/pyUGMIvJVs

It's time to say #goodbye to our old friend Internet Explorer. The first version was released in 1995 and on June 15th, #Microsoft will end its 27-year #service with #InternetExplorer. pic.twitter.com/AD7Eh3kRMw

‘WiFi Drops by One Bar’ Are Going Viral, Twitter Is Flooded With The Funniest Memes