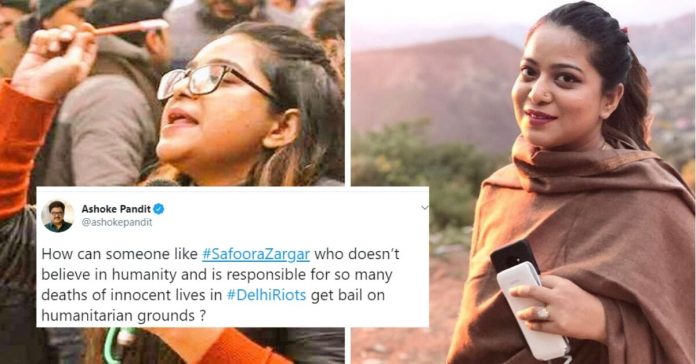 On Tuesday, the Delhi High Court granted bail to the Jamia Milia Islamia students Safoora Zargar who was arrested in February for instigating violence in the National Capital. This time, the center did not oppose the bail on humanitarian ground.

Lawyer Tushar Mehta who was appearing for the Centre told Justice Rajiv Shakdher that the center has no problem with Safoora getting bail on humanitarian grounds as long as he does not engage in activities for which she was arrested in the first place. The Judge further directed Safoora to not get involved in activities that would hinder the investigation and also told that she would have to seek the permission of the court if she has to leave Delhi.

30-year-old Safoora who is five months pregnant was asked to sign a personal bond of Rs. 10,000. She has to contact the investigating officer once every 15 days. The court also said that the bail order may not be cited as a precedence in this or any other case. Safoora is booked under Unlawful activities prevention act for making an inflammatory speech that supposedly led to the violence and rioting in North East Delhi that took the lives of 53 people.

While one section of social media erupted in joy, the other section slammed the court for granting the bail. Here’s how social media reacted.

How can someone like #SafooraZargar who doesn’t believe in humanity and is responsible for so many deaths of innocent lives in #DelhiRiots get bail on humanitarian grounds ?
When she has the energy to fight against the nation she should be prepared to face d punishment also.

#SafooraZargar, a criminal and a #terrorist has been released on bail on humanitarian grounds.

Good to know that #SafooraZargar is finally granted bail by the High Court. She should have been out not only because she was pregnant but for her right to protest.

Mob violence instigator #SafooraZargar gets bail on 'humanitarian' grounds.
Let me introduce you to Sunaina Patel. 2 months pregnant when she got posted as a commando in Dantewada. Nation first, she didn't take leave even at the insistence of seniors. Now, mother to a baby girl! pic.twitter.com/C9dibhK2d9

Centre agrees or succumbs?😊
Speechles that HM @amitshah agreed to give bail to alleged terrorist #SafooraZargar on humanitarian grounds
While @narendramodi supporters left no stone unturned to support govts decision to arrst her
BJP's magnanimity is only for zlamists & liberals pic.twitter.com/dIUZmDWUCi

#SafooraZargar so glad she has been granted the bail that should have been granted in the beginning.
indeed she should never have been arrested in the first place while a Kapil Mishra struts around free inspire of numerous complaint….

There were widespread concerns raised about incarceration of Zargar, who is in 23rd week of her pregnancy, in overcrowded Tihar prison amid COVID-19.

She was arrested on April 10.https://t.co/KAElGx5k0B

Peeps who thank hon. court regarding #SafooraZargar bail should have the magnanimity to thank Modi, Doval & IB as well.
So much to do with RW ecosystem & unity when 100s of loyal KKs languish in Kerala, WB jails on false charges without trail for years. 🙏to their families! pic.twitter.com/C5EFUOlnQV

Traitor…… should be in jail for life long #SafooraZargar

I Don’t Watch His Channel But….: Supreme Court On Arnab Goswami Bail