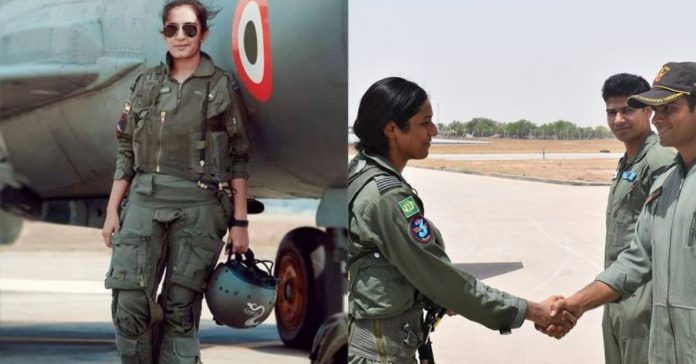 The Indian women are making a mark in almost all the fields previously thought unconquerable to them.

Flight Lieutenant Bhawana Kanth has given yet another reason for all the women to believe in themselves and to believe that the sky is the limit for them. Kanth became the first fighter pilot in the history of our nation to qualify for undertaking daily combat missions.

Prior to being handed over this new task, Bhawana completed her syllabus for fighter pilot on the MiG-21 Bison aircraft. Born and brought up in Bihar, this IAS officer has successfully completed her solo MiG-21 flight that included all the stages of flying from combat flying, technical flying, air to air combat and air to ground combat.

For her new post as a pilot for daily combat missions, Bhawana has been posted in Nal Base, Bikaner, Rajasthan. Along with her squadron, she will perform all the day-to-day operations from here. Bhawana Kanth is just overwhelmed for new success.

She said,  “After clearing my Stage I training, I got the golden opportunity to opt for the fighter stream. The best and the biggest thing that has happened to me and the best part is it is just the beginning. It is my aim to become a good fighter pilot and fight for the nation and make my parents proud.“

Bhawana Kanth joined the fighter squadron in November 2017. In March 2018, she flew the MiG-21 Bison solo for the first time. Incidentally, she was also the part of the first batch of IAF’s woman fighter pilots.

Group Captain Anupam Banerjee, an IAF Spokesperson said, “With her dedication, hard work and perseverance she has become the first woman officer of the IAF to achieve this feat.” A news agency has reported that Kanth will be allowed to carry combat operations in the night after she has successfully completed her training for night missions.