When a pothole takes an artistic shape or a street percolates in the colors of creativity, Badal Najundaswamy shouted in silence about the things we give a seldom care. Art always has a subtle gamut but when the craft and its dexterity manages to touch the emotions of a Common man, artist elevates. Badal is an artist of this kind who comes with an incredible sense of looking at the things around in a way we would not have imagined. An alumnus of Chamarajendra Academy of Visual Arts (CAVA), Mysuru, Badal is an Indian painter who is primarily known for his popular street art and 3D Paintings. Come, let us know about the Man who always inspires and strives to bring that little change in the society through his art & craft. #2 He is a Gold Medalist of the Bachelors of Fine Arts 2004 batch from Chamarajendra Academy of Visual arts (CAVA) however it was not a cake walk for him. #3 As a child, Badal was deeply drawn towards painting and literature. He decides to pursue art, however, limited sources of income strives to stop him, but he didn’t. To bring in the required fees for University education, Badal converted a petty shop into a painting workshop and sold his paintings. 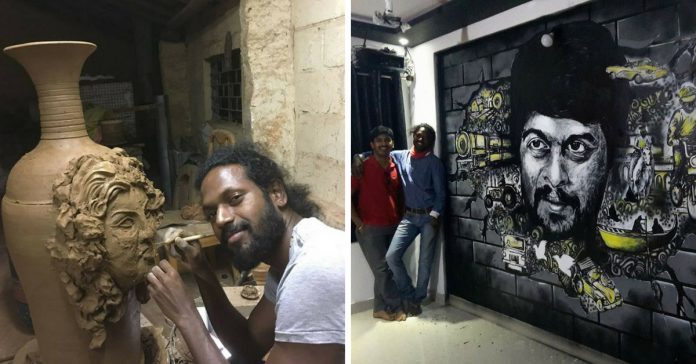 #4 After graduating from CAVA, Badal works with Ogilvy&Mather, Bangalore (India’s most reputed Advertising Agency) as a visualizer for three years before choosing to work as a freelancer. #5 Badal then works as an art director for Kannada plays, Documentaries, Films, and Shorts coupled with design work for independent projects. As an Art director, some of Badal’s noteworthy works are Lucia, Lifu Ishtene, Prakruthi and Police Quarter. #6 In 2012, Badal started working on a series of sketches using colored gel pens as the only instrument. Forty such sketches were displayed in an exhibition titled ‘Colors and Beyond’ in the Suchitra Art Gallery which was based on the ‘slice-of-life’ scenes as observed by the artist.

In 2013, Badal displayed his painting in one of his solo exhibitions titled ‘Machine Manushya’ held in Sabarang art gallery, Mysore. Along with paintings, Badal is also known for various art installations which we can find in Kalamandira, Mysore. #7 Besides paintings and art installations, Badal is primarily known for his incredible street artwork which brought him to the limelight. The street artwork was done to highlight the crooked conditions of roads in Bengaluru and Mysuru which have gone viral on Social media, reported by Newspapers and acclaimed across the World.

“Only the main roads have become slightly better but apart from that it’s still the same with potholes, broken roads.” – Badal Nanjundaswamy #8 Along with Paintings, Art Installations and Street Art, Badal has also worked with several Non-Profit organizations to spread the awareness about the things that matter but ignored.

#9 Nanjundaswamy’s efforts paid off when BBMP covered the pothole after the pictures went viral. Also, the Crocodile installation had managed to grab the attention of Mahindra Group’s Chairman Anand Mahindra who went on to praise Baadal and promised to support his works. #10 In April 2015, Badal Nanjundaswamy was honoured with ‘Pride of Mysuru’ Award by Pragathi Pratishtana. He was also awarded with “Bengaluru Youth Award”, “Samartha Kannadiga Award” by Kannada Sangha, Mysuru and “Pride of Workmanship Award” by Rotary Club Bangalore in 2017. A Time When Ratan Tata Was Called As A ‘Wrong Choice’ And JRD Accused...

News Karthikeya - February 22, 2020
0
In an interview with the Humans of Bombay (HOB), Ratan Tata goes on to explain how his first job at Tata Motors was a...

All You Wanted to Know About the Goods and Service tax...

A 60-Year-Old BMTC Engineer Known For Least Breakdowns Suspended On His...