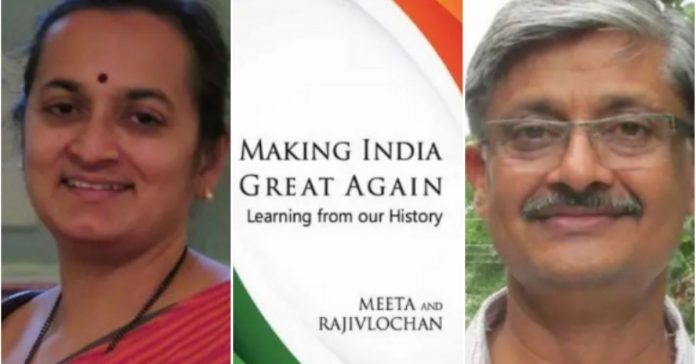 There are those who like to romanticise the India of yore. Those who call her past as glorious, blaming invaders and colonial powers for the country losing its shine without bringing up the Indians who helped enable them. But a perspective to objectively seek, a more realistic and distanced view of what led to the heights of glory and the doldrums of doom which have cyclically visited the Indian subcontinent is rare to come by. Meeta and Rajivlochan’s Making India Great Again: Learning from our history does that.

It is unimaginable to think of the history of this land without talking of the the rise and fall of mighty empires and kingdoms. But what made for the complete lack of a sense of contemporarian nationalism? Why was India just a bunch of kingdoms and fiefs in a continuous state of war with each other till a powerful ruler got them to unite? Such imposed unity was quick to evaporate bringing up old fissures everytime the sun set on an empire. It didn’t help that there was no institutionalised way to help think differently. What was bringing the foreign invaders to India? After all the wealth of India, the gold the diamonds were renowned. Whether Muhammad-Bin-Qasim (711 AD) who attacked Sindh, Mahmud (who invaded India 17 times between 1000-1026 AD), Muhammad Ghori (first attacked Multan in 1175 and repeatedly did so till 1192 AD), Sultan Mahmud of Ghazni (who was the first to penetrate deep into India), Timur (who marched on Delhi and took over the region around in 1398) Nadir Shah (1738 AD) every invader who marched on this land came to spread their religious, to extend their empires were drawn by the immense wealth of what was still one of the richest lands of the world. The plunder of the Somnath temple, the looting of the Peacock Throne and the Koh-i-Noor that went on to become the jewel in the crown of the British empire is proof of the plunder.

Colonialism destroyed Indian economy, with the British giving deathly blow with their policies which ended self-sufficiency. Since the industrial revolution was already making waves in England, India became the source to fund it, provide raw materials and a ready market for British goods and textiles. The call for Swadeshi during India’s freedom movement led to a call for boycott of foreign goods, to awaken national self-esteem and hit the British economy where it hurt most.

India’s fatalism and centuries of living contented lives contrasted hugely with the way the West saw wealth where amassing more than needed was seen as a virtue.

In Making India Great Again the authors contend that building robust institutional networks of information and trust will remarkably boost India’s ability to create wealth. State apathy is blamed for the condition we find ourselves in. The authors point out how though India has always been a land of innovation, there seems to be difficulty in Indians picking up do’s and don’ts from past experience. They say that a learning ecosystem that could be used to leverage success is what is needed to unlock India’s complete potential.

The arrival of the East India Company may have haralded the Brtish Raj but it also taught Indians to overcome difficulties in a tough market and emerge strong. This changed the face of both Indian businesses and the way they were run for good. The British brought in templates to sytematise, collate information scientifically and harness both these factors to boost productivity and profit.

The book also takes a look at the several of India’s social groups who lived hand-to-mouth – thriving on the simplest meals and the way the British abused the role of their institutions in systematising information as borne out by the horrific famines which ravaged Bengal which had been the richest province till then.

A chapter on banking and value creation which looks at how the Nawab of Bengal, Murshid Quli Khan, and Manickchand came together to fascinatingly points out how this sowed the seeds for banking in India. History shows there was never any dearth of wealth in India but Indians lacked the know-how to put such capital to effective and efficient use. It will be recalled how Kerala’s Sri Padmanabhaswamy Temple had amde international headlines following the discovery of Rs90,000 crore wealth.

The book also goes into considerable details to look at the iron and steel manufacturing processes which was indigenously developed in in India. Despite producing the best steel in the world, Indians were unable to scale up production to keep in step with the increased demands of an industrialising world. Though most mathematical theories which have helped the world make strides in the field of science emerged in India, the country of their origin could not capitalise on this.