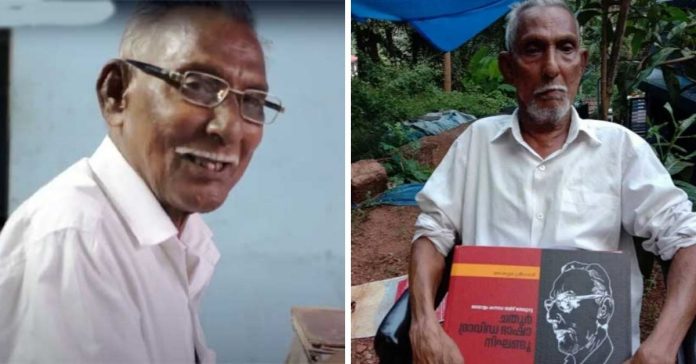 This man is certainly an epitome of perseverance and dedication, who published his own dictionary at the age of 83 after a long painstaking effort of 25 years from the early 90s. What makes his dictionary more interesting is the way he has scripted it. The dictionary is a compilation of four major South Indian languages namely; Malayalam,Tamil, Telugu and Kannada. There are a whopping 12.5 lakh words in this unique dictionary , and for each Malayalam word there is a corresponding word in the other three languages.

Who Is This Genius ?

The man is Njattyela Sreedharan who is 83 years old currently and hails from Thalassery district of Kerala. He is a school dropout and has only formal education till 8th standard, that too he pursued when he was doing his job at PWD department.

It was his love for the words and language, which drove him through the way for these 25 years which has proved fruitful today. His dictionary is unique and only one of its kind in the country. He was inspired by Hermann Gundert, who created the first Malayalam-English dictionary in 1872, and a surprising element is that he too hailed from Thalassery.

“I think it is his spirit that entered my body and made me work on this project,” begins Sreedharan. He dropped school after completing his grade 4,“After dropping out of school I worked at a local beedi-making factory,” he says. Despite working at the beedi factory, Sreedharan took up the Eighth Standard Public Examination (ESLC) privately and cleared it. “Subsequently, I got myself a job at the Public Works Department,” he adds. When And How Did Sreedharan Begin ?

It was only in 1994 when he retired from his job at PWD that he decided to spend all his time putting together the dictionary. “I would spend hours in my room pouring over words and working on it. It gave me so much satisfaction and happiness,” he recalls.

“Interacting with the local people helped me learn the nuances of these languages,” he says. “Once people learnt my passion, they opened up to me. Everywhere I travelled, I was always welcomed and people were always curious and ready to help in my compilation work. Whether it was during my stay in Mysore or in Andhra.” he added.

“For each Malayalam word, you find a corresponding word in Kannada, Tamil and Telugu. It is truly my labour of love.” says this old genius. It’s really commendable what he has done! and hopefully his achievement is recognized at the National level.