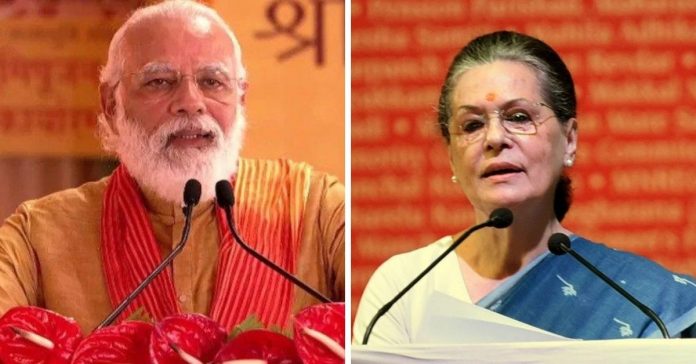 Prime Minister Narendra Modi landed in Ayodhya on the morning of Wednesday and successfully laid the 40-kilogram silver break in Ayodhya to kickstart the construction of Ram temple in the Ram janmabhoomi site.

After laying the foundation, the Prime Minister delivered his address where he said,

“It is my good fortune that Ram Janmabhoomi Trust has invited me to the event and gave me a chance to be a witness to this historic moment. Many congratulations to devotees across the country.” In the speech, the Prime Minister did not mince his words and attacked the congress and the Mughals. He said,

“See the blessings of Lord Ram. A lot of things happened for us to see this day. There were several attempts to destroy the identity of many. For years. But Lord Ram continues to stay in our hearts and minds. It is a great mark of our culture.”

As straightforward as ever, Modi not at all trying to mince his words & exposing those because of whom we had to wait for about 500 years for Ram Mandir#JaiShriRam pic.twitter.com/OX9kgbYrSO

‘India, A Country That Loves Justice’

A year ago, Prime Minister had said that the Indian National Congress had deliberately delayed the construction of the Ram Temple in the Ram Janmabhoomi. In his 30 minutes long speech, he hailed the contribution of many and called the day historic to unite the people of India. He said,

“This day is proof of the resolve of crores of devotees. This day is a unique gift of truth, non-violence, faith, and sacrifice to India, a country that loves justice. Today’s Bhoomi Poojan event is being held amid many limitations. It sets an example similar to how Sri Ram adhered to limits. This example was also set when the top court announced its decision last year. There’s hardly any aspect of life where we can’t draw inspiration from Lord Ram. There’s no national sentiment that doesn’t reflect his values. India’s faith has a reflection of Lord Ram, India’s ideals have a reflection of him. India’s divinity has Ram… when one visits a country, he can sense Lord Ram.”

News Nesara V Jagannatha - September 20, 2020
In his latest interview, Anurag Kashyap revealed some interesting snippets into his life in Bollywood. He also talked about the Insider Vs Outsider debate...

I don’t Want To Work With A TV Actor: Anurag Claims Parineeti Rejected To...

News Nesara V Jagannatha - September 20, 2020
Recently, Anurag Kashyap revealed some interesting snippets of his memories with Sushant Singh Rajput in an interview. He also talked about how Parineeti Chopra...

News Nesara V Jagannatha - September 20, 2020
The AIIMS forensic team, which is investigating the possibility of evidence tampering, has reportedly suggested that the viscera extracted from the late actor's body...

News Nesara V Jagannatha - September 20, 2020
Actress Payal Ghosh, who is known for Telugu movies such as Prayanam and Ooseravelli, has accused popular filmmaker-actor Anurag Kashyap of sexual harassment. The...