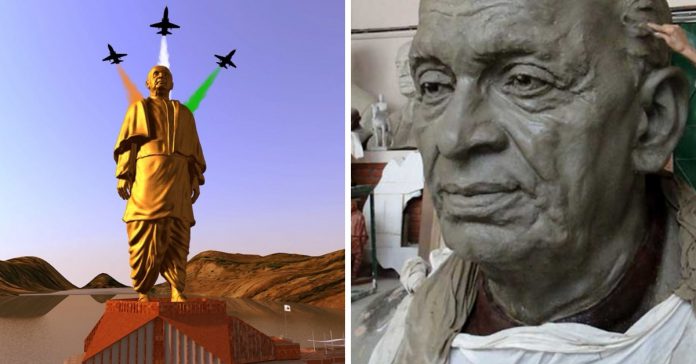 Dedicated to the freedom fighter Sardar Vallabhbhai Patel, the Statue of Unity was unveiled today to the public. It took four years to complete the construction of the statue. This is not mere coincidence that the Rashtriya Ekta Diwas is celebrated today, which is Sardar Vallabhbhai Patel’s birthday. It is in the honor of the man who united the provinces of India after Independence and played a major role in the Civil Disobedience Movement as well as the Quit India Movement. A wholehearted supporter of the Indian farmers and Mahatma Gandhi’s best friend, Sardar Patel left no stone unturned in making an impact when it mattered most. Here are 12 things you should know about the Statue of Unity.

Tallest in the world

Standing at a mighty 182 meters, the Statue of Unity is undoubtedly the tallest statue in the world. Other such landmarks around the world include the Statue of Liberty (93m) and Christ the Redeemer (38m). The Government of Gujarat had raised most of the money for the Statue of Unity – a whopping 8 billion Indian Rupees! A work of many hands

Larsen and Tourbo were in charge of the design, construction, and maintenance of the statue. The Statue of Unity was also under the supervision of Turner Construction (project manager, Burj Khalifa) along with two other firms. Made of various substances

Steel, concrete, and bronze were together used in the construction of the Statue of Unity. This comes as no surprise as the man himself was a man of various fortes – barrister, statesman, and even Deputy Prime Minister. The statue was built on the foundation of social initiatives such as the “Statue of Unity Movement”, the Suraaj Petition and the “Run for Unity”. Yes! The Statue of Unity has been built on a river island known as Sadhu Bet. It has also been accompanied by other recreational facilities. Built by the best

Ram V. Sutar, a Padma Bhushan awardee in 2016 and the Padma Shri recipient in 1999, was in charge of sculpting the Statue of Unity. He has built over fifty monumental sculptures in the last forty years as a sculptor! The Statue of Unity is surrounded by an artificial lake and includes other facilities such as a garden, an amusement park and other amenities which are in the making. The Statue of Unity welcomes everyone and does not cost the visitors anything to go and see it. Places to visit nearby

The Statue of Unity has been built near places of tourist attraction, mainly Gandhinagar. Here, you can visit Bapu’s home and learn more about one of the primary leaders of the Indian freedom movement.

The best time to visit the Statue of Unity would be between October – November, and March-May.

Vadodara has the closest railway station and the Airport to the Statue of Unity. This statue is approximately 200 km away from Ahmedabad. This statue has received a mixed response from the masses. One, however, cannot ignore what Sardar Patel has done for us. We cannot deny that the efforts and the means put into the statue have been thoroughly justified. We as a nation must pass on the story of our struggle to the future generations, and to the world. The statue is symbolic of the same. 10 Iconic Jodis Of Kannada Film Industry Who Have Left A...