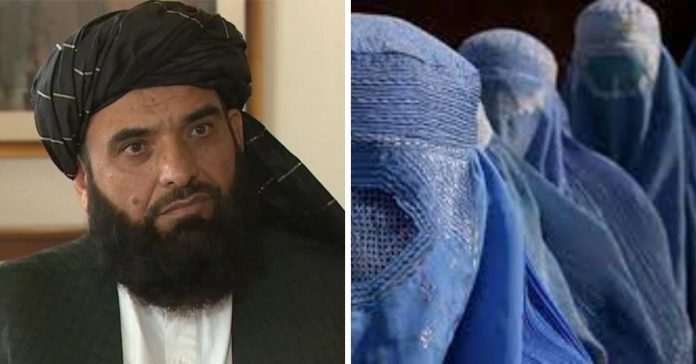 Since after taking the control over the country,Taliban had not given any official confirmations on how the future proceedings will be..However earlier the day a Talibani spokesperson Suhail Shaheen addressing the media spoke over the speculations regarding strict regulations; which it would avoid during he current reign and said that they would stay away from their previous strict Sharia government during 1996 to 2001.

Taliban On Wearing Hijab Over Burqa

Earlier,women were barred from travelling and working, and women were required to wear an all-covering burqa in public.Educational institutions were also closed for females and were not allowed to study after 10 years of age.

But this time addressing the media, Suhail Shaheen, spokesman for the group, said that the burqa is not the only hijab that could be worn; there are different types of hijab not limited to the burqa. The burqa is a one-piece over garment covering the full head and body and a see-through mesh panel but Shaheen did not clarify whether other forms of hijab would be acceptable to the Taliban.

Further adding, he said women could get education from primary to higher education — that means university. He said the group had announced this policy at international conferences, the Moscow conference, and the Doha conference. Confirming the same, Shaheen added that thousands of schools in areas captured by the Taliban were still operational.

Along with clothing issues, several nations and rights groups have expressed concern over the fate of women’s education in Afghanistan now that it is in the hands of the hardline militants.This clarifications from Taliban comes after lots of criticisms by the masses all around the globe and still this clarification remains an obscure one as we still don’t know what Taliban actually meant by hijab whilst they say that they oppose Burqa considering modern rules and regulations. God knows what they(Taliban) are trying to impose upon the entire women fraternity of Afghanistan.