Who has not heard about this famous temple of Sringeri? Sringeri being a holy town is one of the major tourist attractions of Karnataka, visited by people in millions. The primary draw of Sringeri is its temple dedicated to Goddess of Wisdom, Shri Sharadamba. Those who have visited this temple will agree with us that the very ambiance over here is so meditative that it holds us back to its roots. Come, let us know about the history and significance of Sringeri Sharadamba temple, on today’s read.

Sri Sharadamba Temple is a popular Hindu temple dedicated to Goddess Saraswathi, located in the temple town of Sringeri on the banks of River Tunga. The word Sringeri is derived from a Sanskrit word ‘Shrunga giri’ where Shrunga means the Apex, Peak or Summit. It is an 8th-century temple, founded by Shri Adi Shankaracharya. Shankara on his way to propagate Dharma across the country has established four mutts in the four corners of India. They are Badrikasham Jyotirpeetha in North, Dwaraka’s Sharada Peetha in the West, Puri’s Govardhan Peetha in East, and Sringeri Sharada Peetha in South. It is said to have housed a sandalwood statue of Sharadamba in a standing posture, installed and consecrated by Adi Shankara. In the 14th century, when the Vijayanagara empire ruled this land, Sri Vidyaranya installed a seated gold statue of Sri Sharadamba. The legend of this temple says that Sringeri is a place where Shankara saw a Snake cowled as an umbrella to protect a pregnant frog from the hot sun. As a piece of evidence to this, today, one can see a sculpture called Kappe Shankara on the footsteps to the river Tunga. 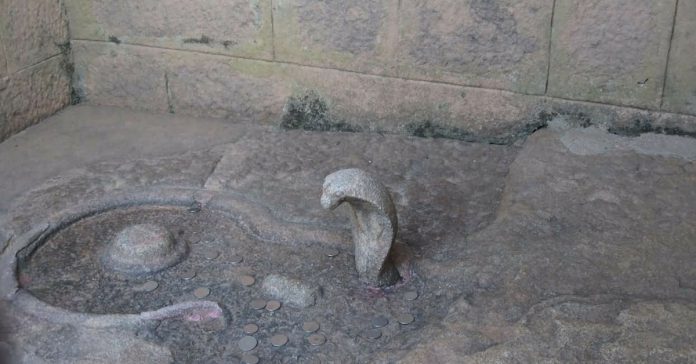 To speak a little about the temple’s significance, it is believed that Lord Shiva gave a crystal Chandramouleshwara Linga to Shri Adi Shankaracharya in the form of a blessing. Even today, Chandramouleshwara Pooja is performed to the linga, every night at 8:30 PM. The main temple is dedicated to Goddess Sharadambika who is believed to be an incarnation of Saraswathi, also worshipped as Ubhaya Bharathi. The faith here says that by worshipping Ubhaya Bharathi, one can receive the blessings of Brahma, Shiva, and Vishnu. The temple is also famous for Aksharabhyasa. It is a sacred ritual followed here where a kid in the age of 2-5 will be initiated to learning. Another major attraction of Sringeri temple is its sacred Sringeri Mutt, also referred to as Dakshinamnaya Sringeri Sharada Peetham. The mutt follows the practices of Smartha tradition and the head over here is known as Jagadguru. A person who sits in the divine Peetha of Mutt carries the name Shankaracharya as a title. The Vidyashankra temple located next to Sharada temple is a perfect example of architectural marvel. One can see 12 Zodiac pillars inside of it, called as Rishi Stambhas where 12 divisions of the Zodiac are engraved. On the other hand, since Sringeri is situated in the heart of Chikmagalur district, it is naturally blessed with rich flora and water bodies. The nearby attractions are Sirimane falls and Hanumanagundi Falls. So, this was about Sringeri Sharadamba temple. Hope you found this post interesting and informative.