MetroSaga
Home City Life You are not a Bengalurian If You Don’t Know These Slang Words... Bengaluru is not just a city but an emotion. The city embraces the vivid cultures and traditions from all the walks of life. This metropolis widely known as the silicon valley of India is rich in its own heritage from language, food, lifestyle and for the nature of adapting to the newer things. Today, let us know some slang words used in Bengaluru which we think has no replacement in the English Vocabulary.

AJM stands for Akkan Just Missu or simply put you can say as ‘Ayyo Just Missu.’ This is very commonly used in Bengaluru and it has no wrong connection to the word Sister (Akka). It is a word used to express that feeling of missing things at the last moment. There is an outrage, frustration, and a subtle kind of grief which is quite expressive. Literally, Chitranna means Lemon rice but it is used in a different context altogether. If something got messed up or when things do not go according to the plan then we use this word called ‘Chitranna’ to express our feeling. Bun Bidu simply means, ‘Come.’ Please observe that this ‘Bun Bidu’ has a sarcastic and insulting tone which is purely contextual. Let’s say, you have got only one Cigarette and your friend asks to share. Then you say, ‘Bun Bidu’. It doesn’t mean that you have agreed to share a cigarette with him. When you say, ‘Bun Bidu’ – you are actually denying it. 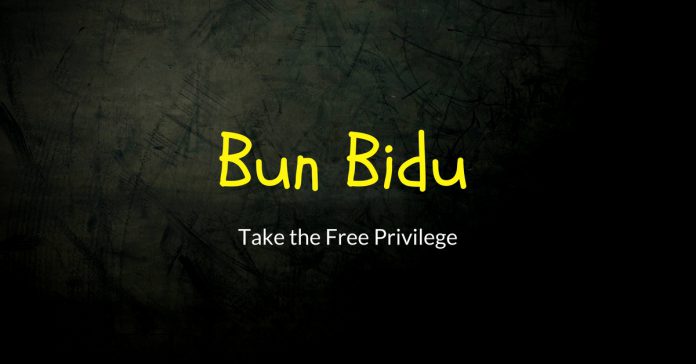 Let’s not get into the details. When a person is full-on busy then this particular phrase is used. Okay?

B: Maga, full work in the office. Kerkolakku time illa. Let’s say that my Uncle is admitted to Hospital and he is in ICU. How do I say this to my friend? – Bro, my uncle, full Karaab Scene in the Hospital. If you have not called your friend as Mom or Maam then you must try it. Don’t call Maama. It has a different meaning altogether. Just say Maam. I really do not know the origin of this word but Poat Aagbitta means to Escape. For an instance: When it was time to give a presentation, my friend ‘Poat Aagbitta.’ If someone is irritating and troublesome then this word is used. “En Koole Guru. Saakaythu.” Iska is a pure local word used in every part of Karnataka, especially in Bengaluru and it means to receive. Soppu = Weed or Ganja. There is a whole list of code words used for Weed but as far as I have noticed, it is called as Soppu in Bengaluru. If you have played Gully cricket in the grounds of Bengaluru then you might have definitely heard this. Budakka Haaku means to bowl yorker length. We all have that one friend who does Sule Nataka. He knows everything but still acts innocent or being unaware. You can relate this to ‘DraameBaaz.’ You are not a Bengalurian if you haven’t used or heard this word. Ninnakkan is a pronoun, adjective and whatsoever for anything and everything you speak in a sentence. Goodhlu means scam. Suppose if you want to use it in a sentence then you can say, ‘Indian Politics full Goodhlu guru.’ You know, Indian politics is full of scam and fraud. That’s it. Kachko is used as a synonym for Stuck and Unmoving.

Hey, why are you late? Do you have Guts? Do you have that nerve to fight with me? Meetru ide eno? You got it, right? The literal meaning of Chatri is Umbrella but as a slang, it takes a different meaning altogether. Chatri = Cunning. Hey, don’t trust him. He is a Big Chatri. Goosa is a Kannada word which means to Punch or a Big Slap kind of thing. Hey, don’t do non-sense here else I will give you a Goosa. Goosa, sounds heavy, right? Dishummm!!! It is similar to saying, ‘Kya Aawaz Dal Raha Hain’? En Rope Haaktiya, Magane? If someone is talking with an unnecessary attitude or scolding you then it is called as ‘Ropu.’ Chintamani means a Super-Idiot, Stupid, and Dumb Ass. You can relate Rahul Gandhi as imagery to this word. Gunna refers to a Dent or a Hollow on the body part when someone got brutally punched. The literal Kannada meaning of Sheke is ‘Heat’ or ‘Hot Spell’ which is a feeling we all go through during Summer. However, in Bengaluru Slang context, Sheke means Tension. When someone is making another to feel superior or unnecessarily praising then that act is referred to as Jack.

Example: A: What Bro? In just one week of Gym, you have got great Biceps.

B: Sumne Jack Hakbeda maga. I’m joining the Gym from Next Week. The most known and commonly used word in every part of Karnataka. If you have a friend who is bald head then you can call him as “Yee Baandli”, “What’s up Baandli?” Swalpa Adumkoli Saar! Adumko is Pakka Bengaluru word used as an alternative to words like Shut your Ass and Shutup. There are so many other words like Guru, Sishya, Maccha, Bombat, Sakkath, Sade, Shaa, Maga, and I can go on like this. Slang words are witty and sarcastically profound that we all should add to our dictionary.

Check out our Part 1 of Benglauru Slang Words

If you found this article interesting then do share with your Non-Kannadiga or a Bengalurean friend.