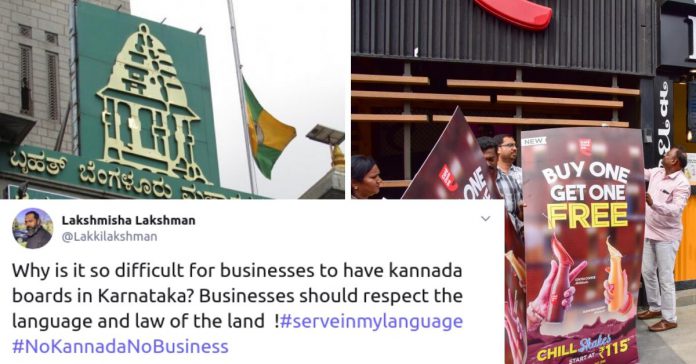 Previously the Karnataka High Court had directed Bruhat Bengaluru Mahanagara Palike (BBMP) to discontinue the licenses of commercial establishments that failed to display their name boards in Kannada despite being hit with notices. However, before the given deadline the high court has shown its soft side by directing BBMP not to take any harsh action against them after some private companies filed a petition against the announcements/notices.

According to the new rule, all commercial establishments in Bengaluru should show at least 60 percent of their signboards in Kannada by December 30, abandoning it would invite penalties.

The Bruhat Bengaluru Mahanagara Palike in a recent raid was catching down signage/boards that did not display the Kannada language. Establishments were also warned that their trade licenses will be canceled if they failed to adhere to the policy. This signage policy was being enforced by the BBMP for pubs, malls and restaurants, and small, medium and big retail shops alike.

HC calls for a halt in the actions

Days after the BBMP went all out on such establishments, the HC made a hearing on a plea filed by members of the Retailer Association of India and many other private companies against the notices regarding the signage. Court gave an order directing the BBMP not to take any coercive action regarding violation of its signage policy.

The private companies include Aditya Birla, Titan, Nature Basket, Adidas, Levis among others. The circumstance will be heard again by the HC bench led by Justice Sunil Dutt Yadav after the winter vacation.

“It is contended that on an earlier occasion, the petitioners had challenged the circulars issued by the respondent – BBMP stipulating the dimension of Kannada lettering and English lettering in the name boards. Which were the subject matter of earlier writ petitions in which BBMP had undertaken not to take any precipitative action under the questioned circular,” the HC said in its order.

It further said, “Respondent-BBMP is restrained from taking action under the circulars….However, it is made clear that this interim order enures to the benefit of the petitioners in this writ petition.”

I wonder how a company go to court against the use of state language?! Only solution is boycott them! And be loud in saying #NoKannadaNoBusiness

If you are not respecting the language and the people where you run your business, it is the mode of self destruction. #nokannadanobusiness

Understand Nature Basket is also one amongst those retailers questioning BBMPs Kannada signage. Recent study by KPMG, Google has highlighted the power of @KannadaGrahaka – remember #NoKannadaNoBusiness – we will move to your competition who is keen on serving us in Kannada.

Here one more, Telugu is bigger than English, but they approached HC when authorities ordered to use 60% Kannada, shame on you @metro_india you want business in Karnataka and you have problem to use Kannada ? #NoKannadaNoBusiness pic.twitter.com/01B65iLAP0

Answer all the telesales calls in Kannada. This has 3 benefits:
1) A job for Kannada speakers
2) Incentive for Non Kannada speakers to learn Kannada
3) Reduces your chance of getting duped in a language that you are not comfortable doing business.#NoKannadaNoBusiness

I don't! Indian languages are not choice!!!
They are the only way to communicate with Majority of Indians. Companies with Only English policy are making our beloved fellow Indians second class consumers even though they pay same price as we do! Unacceptable #NoKannadaNoBusiness

@metro_india I am your customer. I have metro card and my friends too have the supplementary cards. Could you please let us know what's your problem to use my language in our place?
Something like this "Be a Roman in Rome" #NoKannadaNoBusiness

Providing your service in Kannada is not just for people who don't know English. It is the right of every Kannadiga in Karnataka to receive/demand all the services in Kannada, no matter how many other languages they know. #NoKannadaNoBusiness

Why is it so difficult for businesses to have kannada boards in Karnataka? Businesses should respect the language and law of the land !#serveinmylanguage #NoKannadaNoBusiness

Multinational companies who utilise the land, electricity, water and other resources of the state but question the usage of Kannada in signage are one of biggest exploiters of our resources, Kannadigas will have to boycott if they continue the same arrogance. #NoKannadaNoBusiness

#NoKannadaNoBusiness @METROCashCarryF
If ur Dont want local language, then why
Are u staying here,plz get out from here,
If ur saying no to Kannada, later u could say no jobs kannadigas..in China ur respecting China language.. Then why not here..

Unfortunately those companies which call themselves as a multinational miss the obvious.#NoKannadaNoBusiness is a loud and clear message to all these hypocrites.