Shiva, the God of grant and accord is always worshipped as a yogi, mystic and the very embodiment of the Universe. Vedas describe him as Rudra and the hymns “Aum Tatpurushaya Vidmahe Mahadevaya Dhimahi; Tannoh Rudra Prachodayat” tracing Shiva as the Ideal Man. Yogic lore considers Shiva as the Great Yogi, in fact, the first one to have walked this planet. He is also seen as Parabrahman and Yajurveda describes it as ‘Na Tasya Pratima Asti’, meaning the one who has no image.

In this culture, Shiva is seen as the source of liberation. He is celebrated and worshipped for a reason that he explored the ways to ultimate. Across India, we see a lot of temples dedicated to Shiva along with the 12 Jyotirlingas. Today, we are here with the list of Shiva temples in Bangalore. Shiva is given the utmost prominence and we wish you to visit these temples and seek the grace of Bholenath.

If you want to witness the Indian rock-cut architecture in Bengaluru then you should head to this temple called Gavi Gangadhareshwara temple or Gavipuram cave temple. It is famous for stone discs and the mystery of allowing the sun to shine on the shrine in a certain time of the year. The temple is dedicated to Lord Shiva and it was built in 16th century AD by Kempe Gowda. Omkar Hills and Turahalli forest comes within the city where you can easily reach without having to spend long travel hours. A morning ride to these places especially during Monsoons gives you a kind of thrilling experience. Omkar hill is at 2800ft above sea level and houses Sri Dwadasha Jyotirlinga temple which is the main attraction here. You can also see Giant tower clock which is one of the biggest clocks of the world with each hand of clock weighing 40kg.

Where: Srinivasapura (40 km from Bengaluru) If there is any place of interest in Halasuru means it is this age-old Someshwara temple dedicated to Lord Shiva. Dating back to the Chola period, this temple took a major modification under the rule of Kempe Gowda -2. The very architecture, gopura, and the beautifully carved sculptures will add to the beauty of this temple. This is one of the most beautiful temples of the city which was built in the 17th Century A.D by Venkoji, brother of Maratha King Shivaji. It has two entrances, one that lets you inside the outer sanctum and the other with steps moving to the outer sanctum of the temple. Blessed with a beautiful garden and the peaceful ambiance, this legendary temple is certainly an abode of peace and tranquillity. 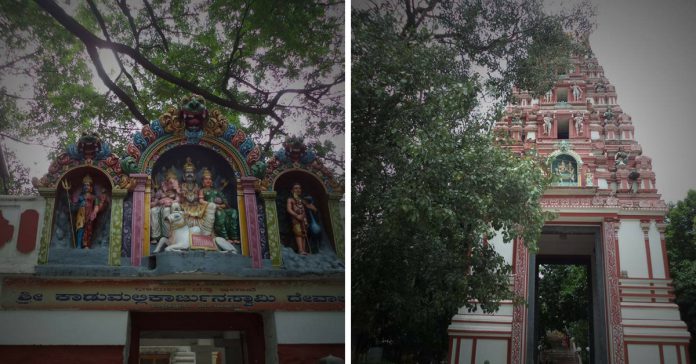 This is a small temple located diagonally opposite to Kaadu Malleshwara temple, exactly in front of the Gangamma temple in Malleshwaram. The very entrance of this temple will make you go meditative and the vibe here is truly magical. At the focal point, you see Nandi which is positioned towards South and that’s the name, ‘Dakshina Nandi’.

In the center, there is a Shiva Linga and the water from Nandi’s mouth falls on it to flow into a stepped tank in the middle of the temple, called a ‘Kalyani’. It is said that the temple is around 400 years old but was recently discovered in 1997 AD during excavation work. Another source from the BN Sundar Rao’s book named ‘Bengalurina Itihasa’ says that the temple was constructed by Rao Bahadur Yele Mallappa Shetty along with the Nandi and Shiva Linga. The Nageshwara temple is located in Begur, a small town located at a distance of 13 km, via Hosur road. The temple dates back to the time of Ganga and Chola dynasties whose inscription is recorded in Epigraphia Carnatica. It has a square sanctum that connects to Maha Mantapa which in turn leads to an open hall. The architecture looks simple yet elegant with white granite pillars and a pita with a sanctum that has a Linga, the universal symbol of Lord Shiva. Kote Jalakanteshwara, a temple dedicated to Shiva is located near Kalasipalya bus stand. It dates back to the era of Cholas which is said to have been renovated by Kempegowda. This is one of the popular Shiva temples in Bangalore which attracts devotees from all walks of life. The temple has three sanctums dedicated to Shiva in the form of Jalakanteshwara, Parvathi, and Kailashnathar. Built recently in 1995, this Shiva temple attracts a lot of devotees. The mesmerizing 65-feet-tall Shiva idol in the backdrop of the Himalayas and the lake of Manasasarovar look-alike gives an alluring look to the temple. It is believed that people also come here to touch the healing stone in the temple which is said to have blessed with mystic curative powers. So, this was our list of Popular Shiva temples in Bangalore. If we have missed any then please feel free to add in the comments below.