MetroSaga
Home News ‘She Will Be More Anti-India Than Republicans: Abhishek Singhvi On Kamala Harris 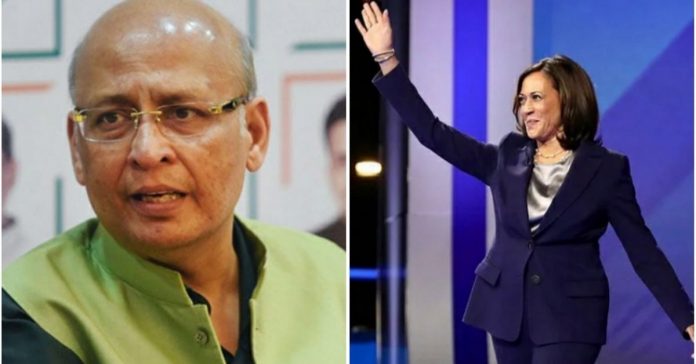 Congress spokesperson Abhishek Manu Singhvi on Thursday expressed delight and scepticism on the selection of Senator Kamala Harris as the vice-presidential candidate for the Democratic party.

Taking to Twitter, Abhishek Manu Singhvi wrote: “As #Indian, am thrilled with #Kamala #US nomination. Sadly, history teaches that #Democrats are consistently more Anti India than #Republicans in most issues. #Biden & #Kamala likely 2b same, possibly worse. Kamala may also hv 2adopt compensatory bias qua #India cos of her origins!”

Democratic party’s presidential candidate Joe Biden on Tuesday picked Harris as his running mate, recognising the crucial role Black voters could play in his determined bid to defeat President Donald Trump in the US presidential election.

The 55-year-old California senator, whose father is from Jamaica and mother an Indian, becomes just the third woman to be selected as the vice president on a major party ticket. Then-Alaska Governor Sarah Palin in 2008 and New York Representative Geraldine Ferraro in 1984 were the other two.

Biden, 77, made the announcement in a text message to his supporters on Tuesday afternoon, ending days of suspense about a week ahead of his virtual Democratic National Convention that would formally nominate him as the party’s candidate for the November 3 presidential election, challenging Trump, a Republican.

“Joe Biden here. I’ve chosen Kamala Harris as my running mate. Together, with you, we’re going to beat Trump. Add your name to welcome her to the team,” Biden said in his message. Biden said Harris will be the best partner for him to finally get the country back on track.