MetroSaga
Home News Rhea’s Family Was Managing Sushant, He Was Downhill Since Then: Sushant’s Family’s...

A major development happened in Sushant Singh Rajput’s suicide case on Monday as screenshots of an S.O.S. complaint made by the late actor’s brother-in-law, Haryana IPS officer OP Singh, were revealed by Times Now. The S.O.S. messages were sent to former DCP Bandra, Paramjit Singh Dahiya, in February this year. The police officer had also acknowledged the messages twice.

In the screenshots that have come to the fore, it has been claimed that on the pretext of curing Sushant of depression, his girlfriend Rhea Chakraborty and her family took him to a resort near the Mumbai airport. It has been said that the Chakraborty family had been managing him and his business affairs and that he was downhill since then. 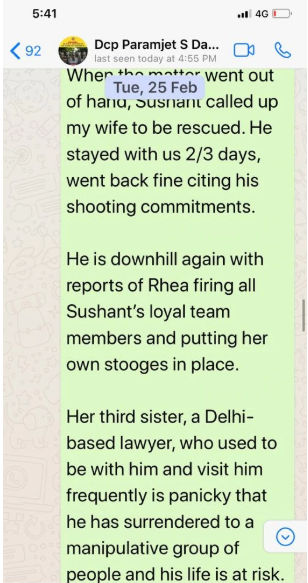 According to the screenshots, Sushant’s Delhi College of Engineering classmate and his flatmate Sidharth Pithani aka Buddha was supposed to give Dahiya the background of the case.

Another screenshot says that Sushant had called up his sister, OP Singh’s wife, to be rescued and that he stayed with them for two-three days and went back, citing shooting commitments. It further says that after reports of Rhea firing some of Sushant’s loyal team members emerged, he was downhill again. It also says that Sushant’s other sister, a Delhi-based lawyer, was panicky as she felt her brother had “surrendered to a manipulative group of people and his life is at risk.”

In its defence, the Mumbai Police has said that OP Singh wanted the case to be “resolved informally” and that he was clearly told by Dahiya that he will not be able to initiate an inquiry without a formal written complaint.

Last week, Sushant’s case took a dramatic turn when an FIR was filed against Rhea and five others in Patna by Sushant’s father KK Singh. Mr Singh has levelled serious allegations, including abetment of suicide.

Sonu Takes Responsibility Of Offering Employment To 250 People In Bihar