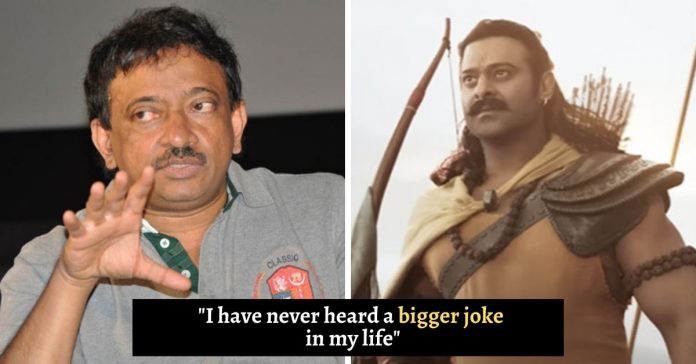 Prabhas starrer Adipurush directed by Om Raut is facing critisim from everywhere. It is hard to imagine that one of the most-awaited Indian films will go down as the most slammed Indian film in recent times, that too before the release. Now, filmmaker Ram Gopal Varma has responded to trolls and criticism of Raut’s magnum opus.

Adipurush’s teaser was unveiled in Ayodhya in a mega event. Ever since the teaser was shared on YouTube, it is going through severe trolling. VFX work, Prabhas’ edited body, and Saif Ali Khan’s Mughal look are some of the points on which netizens are calling out the makers and playing with their sentiments. Meanwhile, Ram Gopal Varma claims that Adipurush is an attempt by Bollywood to degrade the reputation of the Bahubali actor. While talking about the same to a Telugu news channel, RGV said, “I have never heard a bigger joke in my life,” as quoted by Tollywood.net. He further responded to complaints about the film over the looks of the characters, especially Saif Ali Khan as Ravan. “We have an idea that how Rama looks. When Adipurush is different from our idea, many are making criticism. To be honest I don’t like Saif Ali Khan’s look as Ravan. Because since my childhood I used to see SV Ranaga Rao as Ravanasura. Ravan had long hair and a majestic look. When I saw Saif Ali Khan, I was a bit sad. In a democratic country, everyone has the right to do anything. If you don’t like a movie, don’t watch it, if like watch it. Moreover, in the form of a troll, the freedom of others should not be taken away,” RGV said. Also, Reacting to the negativity, Om Raut told indianexpress.com that he was ‘disheartened’ by the reaction to the teaser, but not surprised. He added, “The film is made for a larger medium—the big screen. You can cut it down to some extent but can’t bring it down to a mobile phone.”

Adipurush stars Prabhas as Lord Ram, Kriti Sanon as Sita, Saif Ali Khan as Raavan and Sunny Singh as Lakshman. The film will be released in theatres on January 12.