MetroSaga
Home City Life Potholes On The Road? Or Road In Between Potholes? Bengalurians Are Furious... A bizarre video is now going viral on social media that clearly shows how Potholes in Bengaluru are causing a serious problem for the commuters.

Potholes in Bengaluru have become a serious issue. No matter how progressive a city is, some parts or areas will undoubtedly face potholes-related matters. Potholes not only hinder the route but have also become a reason for road accidents. A large number of people die in accidents due to potholes, but the authorities responsible continue to be careless of the rising figures. 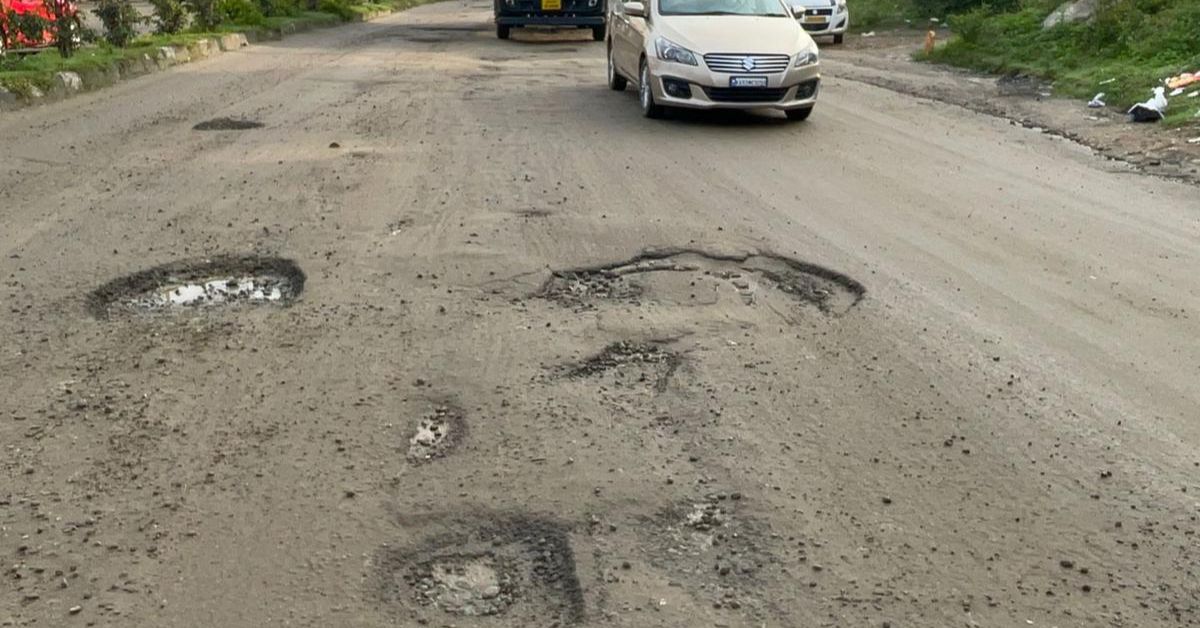 Official documents indicate that at least 13 people have died precisely because of potholes in BBMP limits in the last five years, while the civic agency spent more than Rs 215 crore during the same period to fix the situation. Seven of the 13 deaths occurred in 2021, while 2020 saw three fatalities, said a report.

With Bengaluru receiving heavy rains recently, the situation has become much worse. Concerns have been extended about the safety of citizens, especially due to poor infrastructure. Heavy showers in the past week have made Bengaluru roads difficult to maneuver, for both pedestrians and vehicle users. Be it a ‘boat protest’ or a ‘pothole puja’, Bengalureans have always underlined the pothole trouble in creative ways. However, BBMP, the responsible civic agency, seems to be ignoring these issues.

Explaining the situation, a bizarre video surfaced on Tuesday evening that clearly shows how the city failed with the infrastructure model. In this video, the user has shown Bengaluru to Mysuru road, near the ‘Nice road junction’, with multiple potholes. Due to several potholes, the commuters are having problems crossing the stretch.

The situation resemblance to the ‘lunar surface’ and is a nightmare for riders and commuters. Despite several criticisms and complaints, the BBMP is yet to repair this stretch of the road.

Potholes on the road? Or road in between potholes ?

Welcome to the IT capital of India. Bengaluru -Mysuru road near Nice road junction with multiple potholes making motorists difficult to use the stretch in #Bengaluru. @NewIndianXpress @XpressBengaluru @AshwiniMS_TNIE pic.twitter.com/bBUPvbQ7Zq

Bengaluru was once called as a "IT capital of India", "Silicon valley of India" and "Garden city of India".

Under the so-called double engine BJP govt, they claimed to make it a smart city but they made it Garbage city.

Now Bengaluru can be referred as "Pothole City of India". pic.twitter.com/A9SDkuzJuT

What's common between patriarchy & Bengaluru roads? Both compel you to keep your eyes fixed on the ground – albeit for totally different reasons.

PS: This supposed joke is only as bad as the next pothole or broken footpath you will see in Bengaluru.

Potholes on the road? Or road in between potholes ?

Welcome to the IT capital of India. Bengaluru -Mysuru road near Nice road junction with multiple potholes making motorists difficult to use the stretch in #Bengaluru #BJP Double Engine Government👇@KTRTRS @JAGANTRS pic.twitter.com/zBcxLizEsG

This is a road in India's tech hub — Bengaluru.

The Karnataka High Court is hearing a PIL on city's pothole problem since 2015 but so far there is no solution.

The #BBMP is no mood to listen to the citizens or the courts.pic.twitter.com/9lIo8AnfyL

The CM & co who are completely defaming the city’s/ state’s name with multiple national levels news. #HijabRow #40PercentSarkar #potholes when the focus is more on Chaddi how will they focus on actual issues.
Shameless! #Bengaluru @BJP4Karnataka https://t.co/KO9iokDnBA