Ninasam is a cultural organization located in the village of Heggodu in Sagar Taluk of the Shivamogga district in the state of Karnataka. Founded in 1949 by a small band of enthusiasts, undoubtedly has evolved into many-winged cultural institution over these five decades. It has won wide recognition.

Ninasam is the short form of Sri Nilakanteshwara Natyaseva Sangha, an organization dedicated to the growth of drama, films, and publishing. It has been acclaimed as a unique experiment in fusing culture and activism, art practice, creativity, and collective responsibility. Moreover, it has won wide recognition. The Founder Ninasam and a Kannada writer Kuntagodu Vibhuthi Subbanna, has made outstanding contributions in the fields of theatre, along with films and publishing. Ninasam began as an amateur theatre group housed in a small thatched hut in the verdant environment of Heggodu. Particularly, which was surrounded by rich green and areca nut plantations. It grew rapidly to become a powerhouse of Kannada culture and intellect. Whereas the focus of Ninasam was socio-cultural work. Along with, it also aimed to build a bridge between rural and urban Karnataka by fusing culture and activism.

Ninasam was the brainchild of KV Subbanna which was laid in 1945. As he said it is the communitarian activity. Subbanna and his friends started to get together in the evenings to exchange views and discuss the politics and other current issues. After the Indian Independence in 1947, this group of boys started a library and also launched a newspaper called The Ashoka Weekly with a circulation of 500. This group also started producing small plays and in the year 1949.

Later they formed a cultural group Ninasam, which was the name dedicated to the native Hindu God of Heggodu, Nilakanteshwara. Indeed Subbanna’s father was the first president and the initial plays staged were those related to the Hindu epics, Ramayana and Mahabharata. After his graduation from Mysore University, Subbanna returned to Heggodu. Subsequently, he started producing plays of Kannada translations works by Shakespeare, Moliere and Brecht and also those of Kannada writers. In addition to this, since 1987, Ninasam has been coming out with a quarterly house journal. Originally begun as an amateur theatre group has branched off in several directions. Without a doubt, it has now enfolded with a variety of sub-institutions and projects which are engaged in all round activities. A new synthesis of formal and non-formal modes of arts education. Which has undoubtedly, been seen as a refreshing attempt at reanimating the vital links between the arts and the community. Which means traveling around in Kannada, is a theatre troupe started by Ninasam. Established in 1985, this troupe travels to different places and stages to play mainly to a rural audience. Apparently, in the first 11 years of its existence, Tirugata has traveled 82,000 km to 172 places. Furthermore, it has staged 1546 plays for an audience of about 1.1 million. Actors are employed for a season at a time, and most are graduates of the Ninasam course. Each season offers three plays. Including, two of which are directed usually by members of the faculty or by senior ex-students. The third is often directed by a director invited from outside Karnataka. Besides the three plays are offered as a package deal to organizers. Whereas they can get all the plays for a lumpsum payment. Unlike, the company does not have to worry too much if one of the three plays is not a `hit’ in the conventional sense. For a few months in a year, residents of village step out of their lives and turn into actors of Ninasam’s amateur theatre group. Ninasam has not only played a big role in shaping up cultural literacy in Karnataka but has also inspired several others in the country by illustrating the multiple uses of theatre. Ninasam follows the guru-shishya tradition. Along with, it is totally run by the staff and students who take turns doing the chores in the institute. Last but not least Ninasam has indeed changed the lives of all the people who have come in touch with the institution. Surprisingly Even After 72 Years Of Independence, This Part Of India Has No Right To Vote 10 Authentic Malnad Special Food Items You Should Try Before You Die, Really! Residents Of Bengaluru Gear Up To Protect & Save Stray Birds From Scorching Heat – Kudos! Facts, History, And Beliefs About The Most Powerful Kolhapur Mahalakshmi Temple 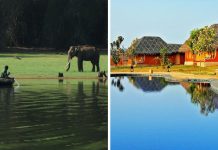 Bengaluru’s Loafers Lane is A Food Street One Should Visit For...

10 Hidden Gems Near Sringeri Of Karnataka You Might Not Have...