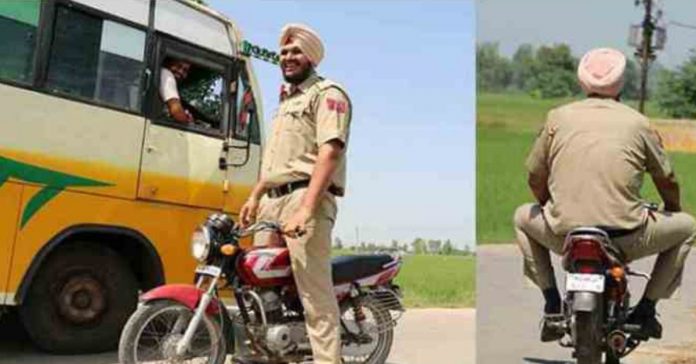 While watching WWF matches one wonders how men can grow to such great heights and look almost unconquerable and so daunting. Our own Great Khali, the pride of India looks equally amazing. But it is not only in the wrestling rings that you see just huge hulks.

Meet Jagmeet Singh from Punjab who at the height of 7 feet 6 inches is the tallest policeman in the world. Advantages And Inconveniences Of Being Extraordinarily Tall

For those who are of short height being so tall is equal to a major accomplishment. But just as Jagmeet Singh was bestowed with few benefits, he also had to face certain inconveniences due to his tall height.

Being tall has made him famous and he is now sort of a local celebrity in and around his town with people coming to him for photographs and selfies.

But the traffic cop who has been in the police for over two decades now had to face a few inconveniences due to his height. He does enjoy being the center of attraction and is very much proud to be the tallest policeman of the country.

Jagmeet Singh said, “ I am 7ft 6in tall, I weigh around 190 kilograms and I feel very happy about it.”

Coming to inconveniences Jagmeet cannot get clothes and shoes of his size in India and hence has to order them from overseas. His shoe size is 19. He also cannot use the normal washroom and have to use his own car for traveling because a local bus or cab is too small for him. For his job as traffic police, he has to get the customized size of uniforms stitched for himself.

His mother Gurshinder Kaur says that children used to make fun of  Jagmeet Singh’s colossal height. According to her, “Jagdeep was born different. From his childhood, we could see his height was different from normal children. People made fun of his height but he never argued.”

There are many people even today who call him a monster on social media.

Finding Lifepartner Was A Daunting Task

Finding a life partner was quite a daunting task for Jagmeet Singh as he could not get a girl near to his height. No girl was ready to marry him as everyone thought him to be too tall. Fortunately, Sukhbir Kaur, a girl 5 feet 11 inches tall agreed to marry him and is proud to have him as her husband.

Sukhbir says,“ Wherever I go with him we get celebrity-like respect.’People come and take photos with us, it’s great. I don’t think there’s anyone that’s taller than him in India or the entire world.”

For Jagmeet the fame he is now enjoying locally is not enough. He wants to get his name inked in the Guinness Book of World Records so that people from all over the world come to meet him. He is eager to see his name in the Records Book sooner.

These Karnataka Lads Are Dominating In The Ongoing IPL Season Giving...

Which Water Sports to Try in Gozo