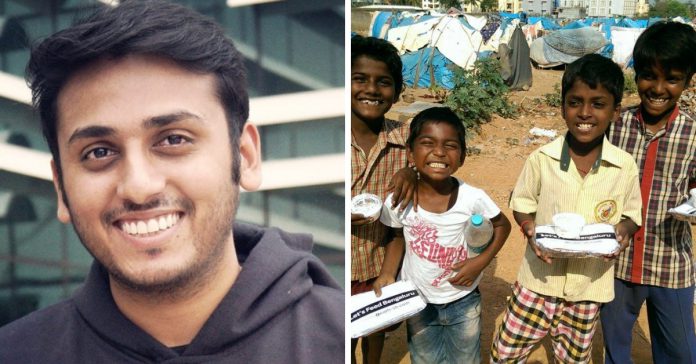 Harshil Mittal a 26-year-old software engineer comes with an innovative idea to help the underprivileged. He started the Let’s Feed Bengaluru initiative in 2015 to provide meals to the needy. The organization collects and distributes homecooked food to lakhs of people in cities.

India, with a population of over 1.3 billion, has seen tremendous growth in the past two decades. Gross Domestic Product has increased 4.5 times and per capita consumption has increased 3 times. Similarly, food grain production has increased almost 2 times. However, despite phenomenal industrial and economic growth and while India produces sufficient food to feed its population, it is unable to provide access to food to a large number of people, especially women and children. india has struggled with inadequate food and water access over the last few decades and around 3,000 people die each day because of starvation and associated illnesses.

Young Idea that could change the world, Lets Feed Bengaluru

When these situations were forsaken by the people around the country, a young software engineer Harshil Mittal decided to do something about it. His idea was simple – ask citizens to cook extra food, and distribute it to the underprivileged. Harshil and his friends Selina Elias, Ashutosh Sharma, and Rishiom Shah started the Let’s Feed Bengaluru drive in 2015.

The four started off by distributing about 40 packets of food; today, the initiative feeds over three lakh people across five cities, with donations from over 4,000 registered donors and volunteers. Apart from the presence in Bangalore, it has started expanding its reach to the cities like Pune, Anantapur, and Chennai. It also carries out the dental education drive which includes dental checkups (or screenings) and educating the kids on the basics of good dental practices. They have reached approximately 1500 kids through education and awareness sessions.

“We went door to door in our housing society, told residents about the concept and asked them whether they would be interested in participating, surprisingly more than 90% of the people approached were enthusiastic about the idea and were willing to participate. We collected the food and distributed it in Tilak Nagar. We fed about 40 people that day. It was our first drive.” says Harshil. He adds, “We request households to make some extra food every Sunday, and pack it in containers. Our volunteers collect these meals and distribute them to the needy.” Serving people in need, a Duty

He believes distributing food to those in need gives him an opportunity to serve people who are lesser privileged than him, and a sense of self-satisfaction. “Everyone deserves to live a life without starvation and illness. Providing nourishing meals is one of the best ways to give them a chance to live that life,” Harshil says.

To ensure the most deserving people benefited from the food drive, volunteers were asked to visit slums or shelter homes and interact with the residents to understand their difficulties. Food drives were carried out only after a thorough assessment. Before food or other items are distributed, awareness sessions are conducted for slum dwellers with regard to health, hygiene, education, road safety, and other important issues. These sessions not only help in keeping people engaged but also improve their quality of life. The Let’s Feed Bengaluru initiative has only grown bigger over time, and similar drives are now organized in Delhi, Warangal, Kolkata, and Pune by volunteers. Harshil says that while his initiative cannot eradicate hunger, it provides an opportunity for people to serve others. They say no efforts are small when it comes to helping those in need. With his Let’s Feed Bengaluru initiative, Harshil is trying to ensure people do not go to sleep hungry.

In 2017, he has conferred the title of Rising Star at the Namma Bengaluru Awards.

Meet This Congress Leader Who Couldn’t Hide His Laughter During PM...

A PU College In Karnataka Made Students Their Students Wear Cardboard...