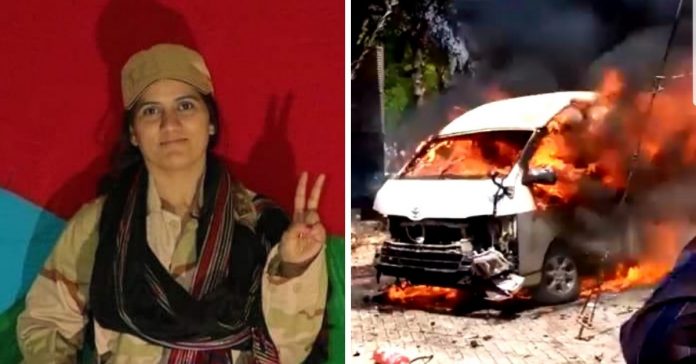 The Karachi suicide bomber, who carried out a blast, killing four persons, was a highly educated woman and the mother of two children. She had been in contact with the militant organization, for two years.

In a suicide attack at Pakistan’s Karachi University on April 26, at least four people, including three Chinese nationals, were killed and several others were injured. The suicide bomber, 30-year-old Shari Baloch from Niazar Abad in Balochistan’s Turbat, had completed MSc in zoology.

CCP has already stopped its investments in Pakistan after several similar attacks on its nationals.

Her father was a government servant, while her husband is a dentist. She is also survived by two kids – Mahrosh and Meer Hassan. The family is well educated and had no connection with armed groups.

So who was #ShariBaloch, the 1st #Baloch woman to carry out a suicide attack?#BLA says The 30 year old joined the group 2 years ago & volunteered herself for “self sacrificing mission”. She had a Masters degree in Zoology & MPhil in education while teaching at a school. pic.twitter.com/nO2usqpyhh

She was pursuing M Phil and was a science teacher according to a statement released by the Afghanistan-based militant organization, Balochistan Liberation Army (BLA), which claimed responsibility for the attack.

Shari Baloch united with the suicide squad of the BLA’s Majeed Brigade two years ago. The BLA said that she had been offered the option to opt-out of the squad because of her two young children, but she declined.

#ShariBalochhas had two kids (8 & 5 years old). Her husband, Habitan Bashir Baloch, is a dentist & her father was a lecturer.

Her husband tweeted from an unknown location that he is proud of what she did. pic.twitter.com/XxDLMWrLlo

“Shari Jan, your selfless act has left me speechless but I am also smiling with pride today. Mahroch and Meer Hassan will grow into very proud humans thinking what a great woman you were. You will continue to remain an important part of our lives.”

The militant organization has now threatened to target more Chinese nationals and China’s interests in Balochistan and Pakistan.

“Baloch Liberation Army’s Majeed Brigade targeted Chinese officials in an attack on Tuesday in Karachi. Three Chinese officials Huang Guiping, Ding Mufang, and Chen Sai were killed in the attack, whereas, Wang Yuqing and their security guards were injured,” the BLA statement read.