MetroSaga
Home Movies We have imagined Indian Politicians as GOT characters and it is bang... We’re sure that most of you would agree that the politics and characters of the fictional land of Westeros (Game of Thrones) somehow find their parallels in Indian democracy. Well, we are here with this amazing article where we have imagined Indian Politicians as GOT characters

Indian Politicians as GOT characters

To start with, Sonia Gandhi as Cersei Lannister as both are extremely loyal to their family. They will protect themselves and their family through any means necessary. This is pretty close, Manmohan Singh as Robert Baratheon as both were once widely respected and now is just a shadow of their former self. Looks on helplessly as they see their friends and family run the country into the ground. Sheila Dikshit as Olenna Redwyne completely compliments each other as both are usually formidable opponent but has been rendered helpless due to forces beyond her control. This is one of my favorite, Rahul Gandhi as Joffrey Baratheon where both were thrust into the limelight at a young age and both are inexperienced, unpopular and widely considered unfit to be the King. P.Chidambaram completely fits in the shoes of Petyr Baelish as both are cunning and a clever tactician who can wiggle their way out of tight spots with the honeyed words. This one is amazing, Arvind Kejriwal as Daenerys Targaryen because both are an outside challenger with little experience who has been gathering power and both wish to claim the throne. Another similarity is certainly the one where both are the champion of the common man. L.K Advani as Davos Seaworth as both are a trusted advisor who finds themselves increasingly irrelevant in a rapidly changing country and now has been sidelined. When almost everyone is on the list, why shouldn’t our PM be there? True indeed, Narendra Modi as Stannis Baratheon as both are one of the main challengers to the throne and is blinded by a thirst for power and will do anything it takes to achieve it.

You may like – 10 unrevealed things about Bahubali 2 which will leave you in splits. Menaka Gandhi as Catelyn Stark because both has to keep their brash son in check and both has had a long-standing grudge against the family in power. Varun Gandhi as Robb Stark because both are brash, angry and out for blood. Both hates the ruling family and often acts without thinking. Yogendra Yadav is Jorah Mormont as they are very much similar and that’s because they both are closest ally and friend of the new challenger. 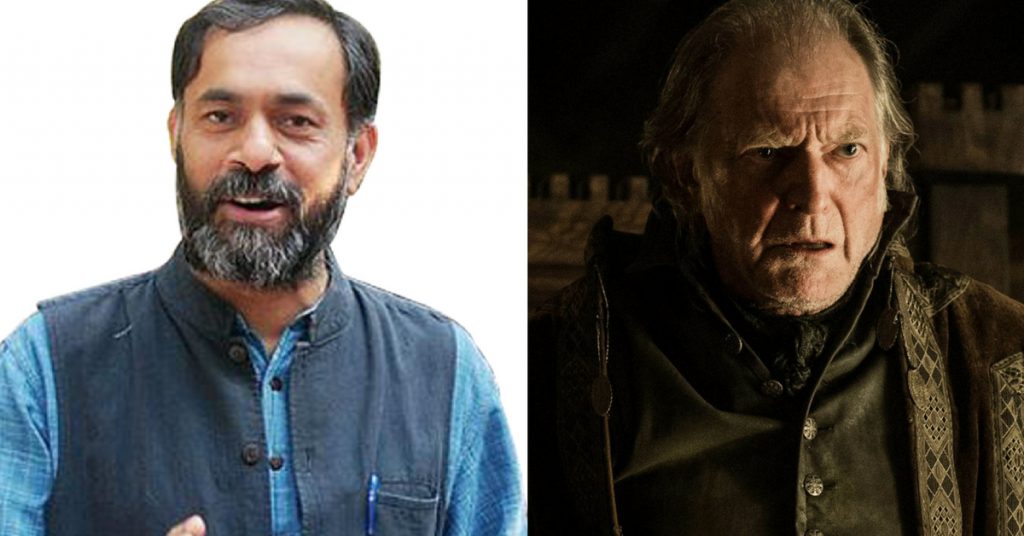 Pranab Mukherjee as Grand Master Pycelle as both are supposed to provide wise counsel but has been reduced to a mere figurehead. Ahhh was that fun? Yes, it is only for fun and not intended to hurt any sentiments. GOT fans, can you relate?