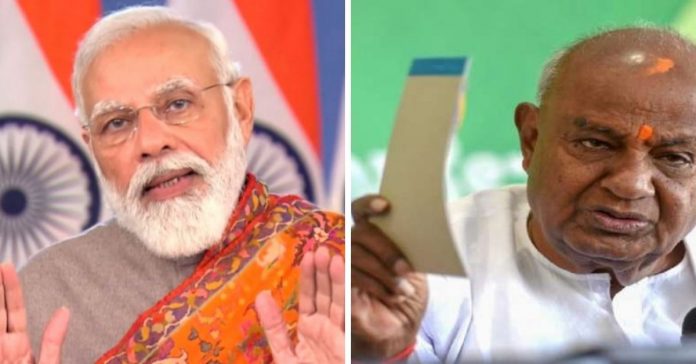 Ever since the farm laws have been revoked, many senior leaders expressed their opinion. Indeed! most of them remained with the farmers, elections in many states are not far away and everyone is clearing their stand regarding this issue. In a recent media interview senior leaders H D Gowda reacted on withdrawn of farm laws and welcomed prime minister Modi’s decision to repeal the three farm laws.

In a major move, Prime Minister Narendra Modi on Friday announced the repealing of the three Central farm laws. “We have decided to repeal all three farm laws, will begin the procedure at the Parliament session that begins this month. I urge farmers to return home to their families and let us start afresh,” he urged.

Farmers Have Been Protesting Since 2020

Farmers have been protesting the Centre’s three farm laws since they were passed in 2020. The three farm laws are — The Farmers’ Produce Trade and Commerce (Promotion and Facilitation) Act provides for setting up a mechanism allowing the farmers to sell their farm produce outside the Agriculture Produce Market Committees (APMCs). Any licence-holder trader can buy the produce from the farmers at mutually agreed prices. This trade of farm produce will be free of mandi tax imposed by the state governments.

The Farmers (Empowerment and Protection) Agreement of Price Assurance and Farm Services Act allows farmers to do contract farming and market their produce freely. The Essential Commodities (Amendment) Act is an amendment to the existing Essential Commodities Act.  In the near future it’s a matter of speculation that how this repealing process will be carried out and a viable solution is taken out of it.

“Will Actively Participate And Come To Power In 2023”, Ex-PM Deve Gowda’s Recent Resolution