Among the popular Devi temples of Karnataka, this Horanadu temple dedicated to Shri Annapoorneshwari stands significant, both on the historic and religious note. It is an earmarked abode of Goddess whose history dates back to the times of Agasthya. Having said that, there are so many stories and legends attached to this age-old temple. Come, let’s get into details and know about the history and significance of Horanadu Annapoorneshwari temple on today’s read.

The temple is located at Hornadu, 100 km from Chikmagalur in the thick forest valleys of Western Ghats. It is dedicated to Shri Annaporneshwari, an incarnation of Goddess Parvathi.

It also called as Adishakthyathmika Sri Annapoorneshwari temple or Shri Kshetra Horanadu temple, located on the banks of river Bhadra. In the context of mythology, it is believed that the idol here was established by Agasthya Rishi in the 8th century.

The word Annapoorna is a derivation of two words; Anna meaning food and Poorna meaning complete or perfect. So, Annapoorna is regarded as the complete food. In this context, Devi here is worshipped as the Goddess of food. 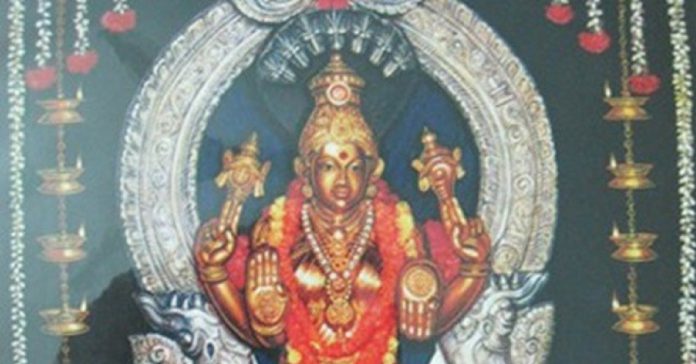 The temple houses the divine idol of Annapoorneshwari standing on a Peetha, holding Shanku, Chakra, Sri Chakri, and Devi Gayatri in her four hands. The idol is always seen covered in gold from head to toe. Locals here believe that people who seek Devi’s blessings will never have a dearth for food in their life.

Going with the legend, once Shiva and Parvathi falls in an argument. As it continues, Shiva declares that everything in the world including food to be an illusion. To disprove his words, Parvathi disappears and makes Nature go still. Because of this, a drought covers the world making life uneasy all around.

Later on, when sages prayed for Parvathi’s mercy then she appeared and distributed food to all. From then, the Goddess is worshiped as Shri Annapoorneshwari Devi. The temple is managed by the hereditary Dharmakartharu priests and their history dates back to nearly 400 years. The family holds the responsibility of keeping the temple alive making it available for devotees. Dharmakarthru here has played an impeccable role in reviving the temple and also a few ritual practices.

Speaking a little about temple’s architecture, it is adorned with beautiful sculptures. The main mantapa being located on the left-hand side of the temple’s entrance, one can see an amazing view of carvings on the ceilings of the temple. The magnificent Adishesha surrounds the main sanctum while the Padma Peetha constitutes Koorma and Ashtagaja. One of the major festivals celebrated here is Akshaya Tritiya. This day is considered as the birth date of Devi and so it marks a special celebration. The temple also hosts a grand 5-day Rathotsava during the month of February along with 9-day long Navaratri fiesta.

The route to Hornadu goes through ghats and dense forests creating an amazing travel experience for the visitors. During winter, Horanadu looks like a heaven on earth and there is no exaggeration to it. If you plan for Hornadu temple then you can cover Kukke, Sringeri, Dharmasthala, Udupi, and Kollur as all these places fall in the same belt. Another major attraction of Horanadu Annapoorneshwari temple is the Mahamangalarathi offered every day at 9 AM, 1:30 PM, and 9 PM.

So, this was about Horanadu Annapoorneshwari temple in brief. Make time for this temple to seek the blessings of Devi and for a nice trip in the Malnad region of Karnataka. If Parliament Wants PoK To Be Part Of India, We Will...

From Masala Dose To Maddur Vade, The Janatha Hotel Of Malleswaram...