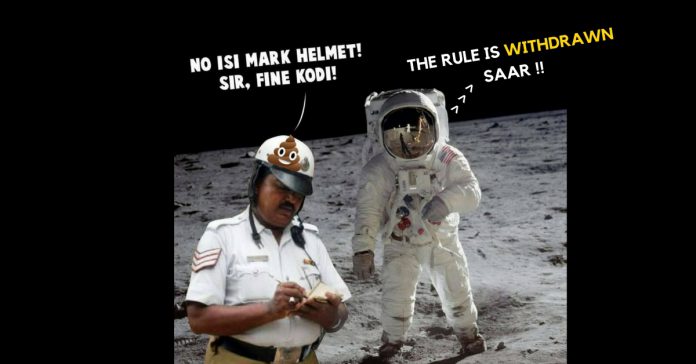 Tit-Bit: BIS (Bureau of Indian Standards) says that the conformance of helmet to Indian Standard cannot be assessed through a visual examination. In a letter to traffic commissioner, BIS wrote about the usage of substandard helmets without ISI certification and said that the verification of the same is not a practical task to accomplish.

No Way to Ascertain Standards of Helmets

The initiative by traffic police which was scheduled to begin from February 1 has been withdrawn owing to the clarification from BIS. It seems that there is no way to confirm the authenticity of helmet meeting the prescribed standard safety requirements by an offhand visual inspection. R.Hitendra, Additional Commissioner of Police (Traffic) had written to BIS a week ago about the clarification of helmets under BIS standards, especially with regards to half-face helmets and imported ones. In reply to commissioner’s letter, BIS stated that the conformance to Indian standards cannot be appraised through a visual communication and so the police have decided to withdraw the ISI – Helmet rule.

“Traffic policemen on duty cannot decide the standard of helmets by a mere physical inspection and hence it is unfair to penalizing bikers for wearing sub-standard helmets,” – R.Hitendra.

A Relief of Blame to Motorcyclists

It is not only a sigh of relief to motorcyclists but also for traffic police as they don’t have to get into an argument with the riders. “It would have been difficult for the policemen on duty to check the quality of the helmet.” – Police Constable.

“Each and every helmet we confiscate would have to be sent to the BIS office and we could not impose a fine until we got the results. Also, it was possible to procure helmets with fake ISI mark.” (Source: Hindu). Irrespective of the rules, let us try to use ISI standard helmets to ensure our safety on the roads. Well, what do you think about it? Please share your take on this in the comments below.

Make time for Chitra Santhe, a Kumbhamela for Art lovers in...

Yeddyurappa To Take Oath As New CM Of Karnataka At 6...