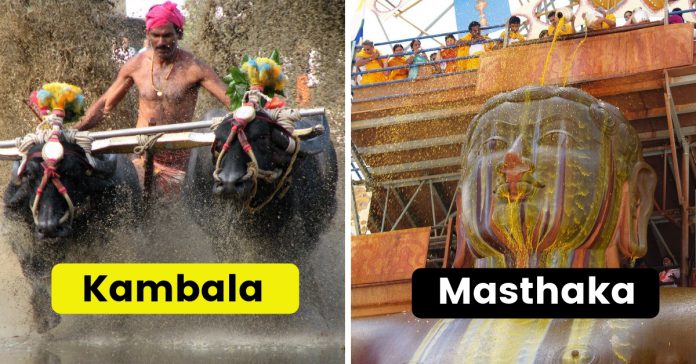 Karnataka is the land of fairs and festivals. Numerous art and culture festivals are hosted throughout the year, which gives one glimpse about Karnataka tradition. From the stunning extravagance in every place across the state has its own festival. Having a history as long as many ancient civilizations, positioned in the crossroad of the South and the West, and being a multicultural society, Karnataka celebrates a wide variety of festivals, ceremonies, and events.

Fun, frolic and lots of dances – festivals in Karnataka is something one absolutely cannot miss. In a state where one can see a rich plethora of culture and tradition, every festival celebration in Karnataka is a sight to behold. Be a part of the vibrant and colorful Karnataka. Here we bring you about festivals and fairs that the Karnataka celebrates in full zeal, enthusiasm, and vigor.

Rajyotsava day or the birthday of Karnataka is celebrated on 1st November, every year. The State Govt announces Rajyotsava awards which are given to people who have contributed to the Karnataka state. Across the state and borders across, Rajytosava is celebrated with all pride. In the capital city, it is one of the longest celebrated festivals which runs up to the end of December.

Also, Read: Kannada Rajyotsava in 5 Different Countries Of The World – Celebrating our Home away from Home It is during the month of January that Hampi architectural ruins spring back to life and bring people together to celebrate the grand extravaganza, Hampi Utsava. Hampi, a spectacular town was once the capital of the glorious Vijayanagar Empire. The festival is organized and hosted with enthusiasm and zeal by the Karnataka tourism. The main attraction of the festival is Kannadigas dance, drama, fireworks, puppet shows, Jumbo Savari, spectacular parades, and musical instruments like drums and pipes, the same way it used to be in the colonial era. While in Hampi, it is a good idea to witness the crumbles of the city which despite being so old have retained its charm. Kambala festival brings the season of splash, speed, and power. More than 150 pairs of buffaloes are groomed specially for the festival and are pegged against each other for the prize money. Some believe that the festival is dedicated to Lord Kadri Manjunatha, an incarnation of Lord Shiva and to make him happy for a good harvest. Others believe that the festival was initiated by the farmer community of Karnataka. The festival also has a historical connect, as per the facts, a racing tradition was started by Hoysala Kings to see if buffaloes can be trained or used in wars. The first thing that comes to mind when one mentioned the word “Pattadakkal” is the group of temples which deemed as the world heritage sites. Pattadakal looks its very best during the grand music and dance gala, known as Pattadakkal Dance Festival. The festival is organized by the Karnataka tourism with a purpose to bring together local artist and celebrate their art on the international stage. Extravagant dance venues take place against the backdrop of 10 beautifully carved Pattadakkal group of temples. The festival is a treat not only for the dance lovers also for artisans and craftsmen. Artisans from different corners of India gather and display their best specimens in the exhibition.

Ugadi symbolizes the New Year in Karnataka. The term “Ugadi” has its origin from two Sanskrit words- yuga (age) and ādi (beginning): “the beginning of a new age.” People wear new clothes, decorate houses, dance to the rhythm of folk music and commemorate the beginning of a new year. Poetic recitation competition, chanting mantras in the temple, listening to the future predictions and a classical music concert is a part of the Ugadi celebration. If one wants to see the full glory of the festival Ugadi, one should visit the hamlets and villages of Karnataka. In Karnataka, Pongal is also known as ‘Sankranti’. During the festival, people decorate their cattle and feed them ‘Pongal,’ a dish made of rice. A special dish called Ellu of coconut, sesame seeds, and sugar is made ready for the day. Cattle, decked up in colorful costume and their horns painted in bright colors, were taken out in a procession. A bonfire is also organized and decorated cattle are made to jump the fire as part of Pongal celebrations in Karnataka. Vairamundi festival takes place on the third day of the Brahmotsavam at the temple of Cheluvanarayana in Melkote. During the festival, Lord Cheluvarayaswami’s statue is adorned with a diamond-studded crown that once belonged to Mysore’s former maharajas. Every year, the festival is witnessed by more than 400,000 people. Along with the consorts and companions, the idol is taken out in a colorful procession throughout the city. Dasara is a 10-day cultural extravaganza for which Mysore is famous for. The festival starts with a procession of decorated elephants led by the Maharaja of Mysore – a grand spectacle. Every evening, Mysore Palace lit up and the streets of the town transform into a gigantic fairground, with concerts, dance performances, sporting demonstrations, and cultural events. The festival is observed to honor the Goddess Chamundeswari who killed the demon, Mahishasur.

Also, Read: 10 Wow Things To Know About Mangalore Dasara and its Key Attractions

During the festival, a tableau of deity decorated with cloth, banana leaves, and flowers is carried through the streets of the Vithappa village. A contingent of 60 drummers, assembled from other parts of the state, accompany this procession. The number of devotees is increasing tremendously over many years. The most interesting part of the festival is seeing many urban people following age-old traditions. Several rituals are associated with the fair. Tula Sankramana is celebrated with great pomp and show in the Coorg district. At Talakaveri, the point of origin of the Cauvery or Kaveri river, people get together to have a dip in the holy water of Tala Kavery. A Fountain from a small tank springs up and fills another larger tank whenever the sun rises and faces the Tula Rasi. Goddess Parvati, who took the form of river Cauvery, is worshiped by placing betel leaves and areca (palm) nuts, bangles, sandalwood paste, Vermillion, and turmeric. Every 12 years, millions of pilgrimages make their way to Gomateshwara temple for Mahamastakabhisheka. It is an important Jain festival, where the grand statue of Gomateshwara is bathed and anointed with milk, saffron paste and dusted with powders of turmeric, sandalwood, and vermilion. Each and every ingredient poured on the statue has a significance- water to cleanse the statue, sandalwood to spread the fragrance of Bahubali’s virtues, kashkachoorna to beautify and cane juice to relieve hunger. Godachi Fair is a noteworthy festival that takes place in the first month of Kartik in the small village of Ramdurga Taluk of Belgaum district. The feast is commemorated in the honor of Shri Veerbhadra, the chief god in the Veerbhadra temple and an imperative attendant spirits of Lord Shiva. A fair is organized every year by Karnataka Tourism featuring food stalls, rides, games, traditional celebrations, etc.

Don’t miss to visit these places somewhere around these fairs and festivals. It is advisable to contact the organizing committee before planning a visit to the see these festivals. 5 Reasons To Visit The Bahamas

7 Sports-famous Kannadigas of Bengaluru who have created Records at World...