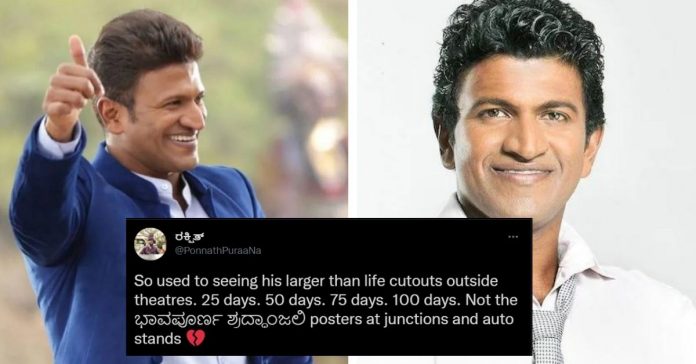 It was a sad day for the state of Karnataka. Puneeth Rajkumar, one of the strongest pillars of the Kannada Film Industry, passed away this morning. Son of the legendary actor Dr Rajkumar, Puneeth was just 46 years old.

Puneeth always employed a healthy lifestyle. He was one of the fittest actors in the industry. This morning, too, Puneeth had completed a gym session but he collapsed after it. After getting the ECG done by a family doctor, Puneeth was transferred to the Vikram Hospitals. However, en route, as per the doctors, the actors suffered a cardiac arrest. The doctors tried their best to revive him but failed in their attempt.

Fans pay tribute to the Power Star on Twitter

For citizens of this generation, Appu is very close to heart. For the older people, as well, Puneeth Rajkumar was well-known as he had done plenty of films as a child artiste. Puneeth also gave movies that satisfied the tastes of the youth and the family audience. Hence, he achieved immense success and in a very short span, became a star in the industry.

Apart from his accomplishments in the film industry, Puneeth was also a splendid human being, something that earned him plenty of fans. He also set up plenty of initiatives that took society forward. His sudden demise is a setback to the industry and the state. Fans reacted to the sudden news and paid tribute to the legend:

So used to seeing his larger than life cutouts outside theatres. 25 days. 50 days. 75 days. 100 days. Not the ಭಾವಪೂರ್ಣ ಶ್ರದ್ಧಾಂಜಲಿ posters at junctions and auto stands 💔

#PuneethRajkumar #ಪುನೀತ್‌ರಾಜ್‌ಕುಮಾರ್ When I started Banking career in 2008 in American Express , My colleague Smitha Badruk took me to your office and she said I was your big fan n came to just meet you, You stood up and hugged me, Your simplicity n behaviour made you superstar pic.twitter.com/OGPdMYKwGc

Will always be worst day of my life

He would do that every time we met. Raise his eyebrows like that and smile. This is how I will remember him. Warm , respectful and enthusiastic. I will remember his kindness, his simplicity, his extraordinary memory. Neene Rajakumara…. #puneethrajkumar 🙏🏽 pic.twitter.com/RzcGCyKGZ8

Let him see this world forever through his eyes ! #PuneethRajkumar pic.twitter.com/FjJ2gHYyfQ

Millions Of Fan's Gone Mute
King Will Be Remembered 🙏🏻

A #BTV News anchor in Bengaluru broke down while reading the news of Puneeth Rajkumar.

Shocked & devastated. He was the nicest person who would treat everyone with respect and with a smile always. I’ll remember that forever.