Obama took a tour of the Great Wall of China and said, ‘We need one of these things around the White House.’ This may sound bizarre but on a lighter note, the Great Wall of China has never fallen flat to impress the World. Being recognized as one among the Seven Wonders of the World, the wall is a series of fortifications made of brick, stone, tamped earth, wood, and other materials. It is built across the northern borders of China to protect the Chinese states and empires from foreign invasions. The Stories and Facts about the Great Wall of China is an interesting topic of discussion.

Sources say that several walls were built during 7th Century BC which later joined together and made stronger, are now referred to as the Great Wall of China. The wall built by Qin Shi Huang in 220-206 BC is the famous one, however, majority of the existing wall is from the Ming Dynasty (1368-1644). The Great Wall of China was built for a reason to protect China from its enemies from the North, especially Mongolis. The Mongolis were a group of tribal people who would run continuous raids into China.

The wall is considered as the greatest Military defense project in the history and it stretches from Dandong in the east to Lop Lake in the west. The Arc we see has roughly delineated the Southern Edge of Inner Mongolia. In brief, the Great Wall of China is the collection of fortifications built by Millions of people. The labor force included workers, soldiers, forcibly recruited peasants, slaves, convicts and war prisoners.

Facts about the Great Wall Of China 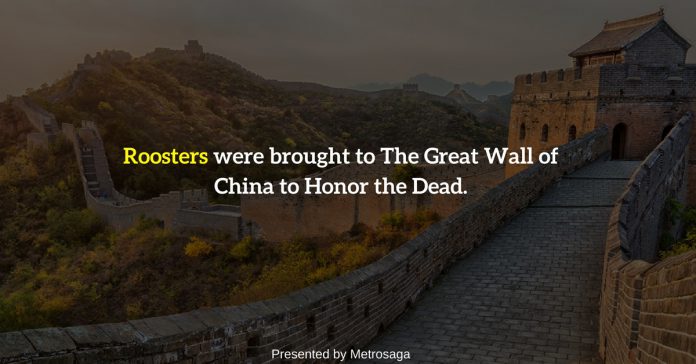 These were a few facts about The Great Wall Of China. If you have anything to say about the topic then please contribute your words in the comments below.

Get the Best Of Metrosaga delivered to your inbox. Subscribe to Metrosaga and never miss an update from us.

China Returns To Normalcy As Great Wall of China Reopens