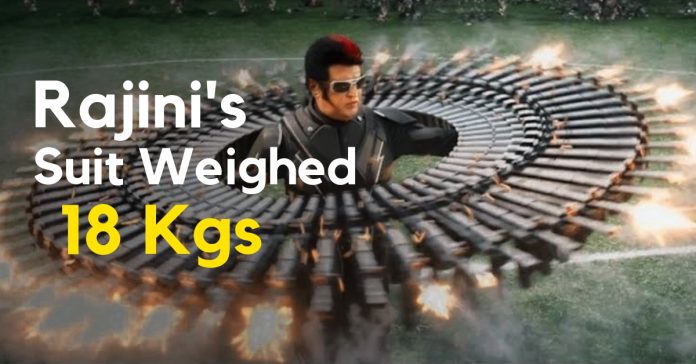 We have all been eagerly waiting for the most awaited movie so far – Enthiran 2. There has been a lot of gossip around this movie, ever since the first look, in November 2016. We at MetroSaga are equally excited about this movie and are here to bring to you a few mind-blowing facts about this Rajinikanth-Akshay Kumar starrer, 2.0.

This is the first movie to be made entirely in the 3D format. This will be a treat for the cinema goers all across the world. What’s more is that the editing had to be done while wearing 3D glasses, making it very challenging for Sean Foot, who had previously worked on Avatar. From the costume design to the make-up and the effects, major men from Hollywood were roped in to make this movie the biggest hit ever. These are the people behind the success of Avatar, Percy Jackson, Daredevil and Life of Pi. Audio unlike anything you’ve heard

Oscar winner A.R. Rahman has been composing the soundtrack for this movie. Though there will be just one song in the movie, there is the talk of a new sound format in which the audio will be experienced. Resul Pookutty who is also an Oscar winner will be the man behind the new and exciting sound experience. At a whopping 450 crores, this film surpasses Bahubali, which was till then the most expensive film ever. This comes as no surprise with the trailer and the film poster wooing audiences everywhere. The marketing team spared no expense as they used the most innovative methods to promote the movie. Hot air balloons were used and sailed over Los Angeles. These balloons had the faces of Rajinikanth and Akshay Kumar and were later tied to the Hollywood signage since the makers identified the movie as a Hollywood product. Several stars were considered for Akshay’s role, including Arnold Schwarzenegger, Hrithik Roshan, Aamir Khan, and Kamal Hassan. However, Arnold could not continue because of the hefty remuneration and then, the Khiladi landed this highly coveted role without much hassle. This film is the first one to use AR for their promotion. In the first look of the movies, Karan Johar interacted with Chitti using AR technology. VFX has taken to the next level

Due to Rajini’s poor health, the film could not be shot in Ukraine as intended. This did not stop the VFX team however as they created backdrops of Ukraine in the sets itself! Also, there has been an impressive usage of visual effects which will definitely win over the fans right from the start. What’s more, there were over 1000 people involved in the VFX team! This film got released on 29th November and is getting a good response from the audience. Seems that it is going to be one of the technically advances movies as far as Indian movie space is considered.

The Writer and Director, Shankar does not intend to stop with this franchise and has hinted at the possibility of a 3.0 and even a 4.0. This indeed calls for a mind-blowing experience, to mark the ending of 2018. Have you watched the movie? Do let us know you review in the comments below.

All You Need To Know About Dr. Salim Ali, India’s Bird Man Who Inspired Akshay’s Role in 2.0