MetroSaga
Home City Life 10 Things That Happened in Bengaluru On The Day When Dr. Rajkumar... 14 years ago on this day, the Kannada Film industry had lost its one important Jewel – Dr. Rajkumar, who had taken the Kannada industry to the next level. The one who strode the Kannada film world like a colossus casting a spell on millions of his fans for nearly five decades died due to a heart attack on April 12th, 2006. The 78-year-old veteran actor of nearly 200 films was a living legend for his fans who revered him as a demi-god. His demise was literally a doomsday in Karnataka.

As the news of his death spread, hundreds of his grief-stricken fans rushed to his residence at the posh Sadashivanagar, where his body was brought from the hospital. Indeed, the police had a tough time as hundreds of fans gathered outside the residence of Rajkumar to have the last glimpse of their ‘Annavaru’. His demise sent the Kannada film world into a state of shock. 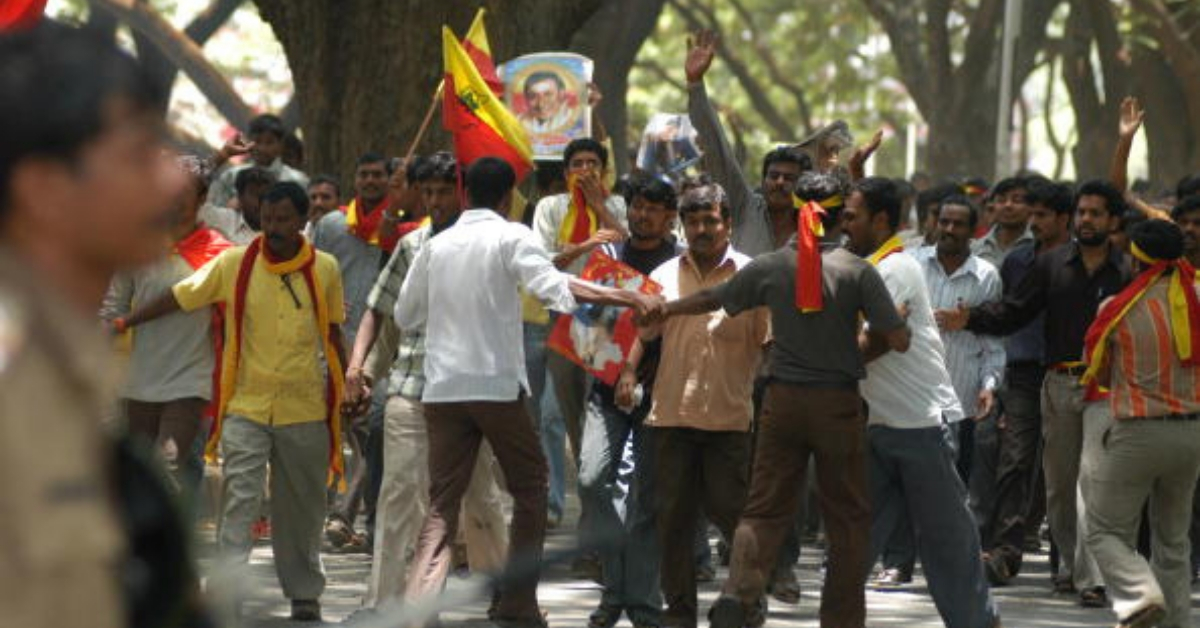 Frightened schoolchildren emerging from exam halls found the streets strewn with burning tires and blocked by barricades, a few government buses with smashed windscreens virtually the only transport left. Gangs on motorcycles and cars descended on the roads and moved around menacingly, enforcing an instant “bandh”, as soon as they learned that Rajkumar had died in a heart attack. 3. A police car was overturned off the road

A mob overturns a police car after hearing the news of Rajkumar’s death. Waving the state’s official yellow-and-red flag, a symbol of Kannadiga pride. they ordered people out of offices, shops, malls, restaurants, and pubs, forced management to close down, and torched cars, buses, and police vans. A Microsoft research center was stoned in the city center. Fans who could not get the last glimpse of the actor’s body pelted stone on the hearse as the body was inside. Son Shivarajkumar is seen sitting on the hearse, and it was becoming difficult for the police to handle the crowd and let the final procession proceed. As the streets were left deserted by 5 pm, BPO and IT workers, who make up a large slice of the city’s workforce, worried whether their night shift would begin at all. With violence breaking out in every part of the city, especially in Sadashivnagar (where Dr. Rajkumar’s house is situated), Bellary Road, Magadi Road, Kanteerava Indoor Stadium and Hudson Circle. With protesters setting vehicles on fire and with the fear of stampede the police resorted to lathi charge. However, when they could not control the crowd, they had to lob tear-gas shells. The crowds in lakhs started protesting against a lack of arrangements made by the government as people could not have a final look at their favorite actor, who was no more. 7. Police were attacked by the Angry Mob

People expressed their anger against the policemen who were trying to control the crowd. As a result, when the police started lathi charge, they started attacking the police. At least 25 policemen were severely injured and had to be admitted to the hospital. The media covering the violence made the crowds angrier, and stones were pelted on the media persons reporting and their vehicles. Moreover, some were even angry that media people were allowed to go with the procession and way was made for them whereas people could not see the actor’s face. The people who had started to Bangalore from distant places in Karnataka had no clue that Dr. Rajkumar had died by the time they started their journey. But as they reached Bengaluru, the Majestic bus stop, all buses were stranded at the bus stop, and the authorities had decided not to schedule any buses that day as angry people were pelting stones and even setting fire to the vehicles on the road. When the news spread that the body would be taken to Kanteerava Stadium, fans here started protesting, and violence soon erupted. However, it was difficult to get the vehicle out of the ground. But thousands of people waiting at the Kanteerava Stadium got angry, and they ransacked the stadium. In fact, abuses were hurled at the then chief minister Kumaraswamy, alleging him of not making proper arrangements for the fans to be able to see their favorite actor for one last time. “It’s a deviant way of expressing love and affection,” said Dr. P. Kodandaram, a clinical psychologist and former professor at the National Institute of NeuroScience, Bangalore. Even years after his death, Dr. Rajkumar continues to be remembered and revered as the Kannada film industry’s jewel and a symbol of Kannada’s pride.