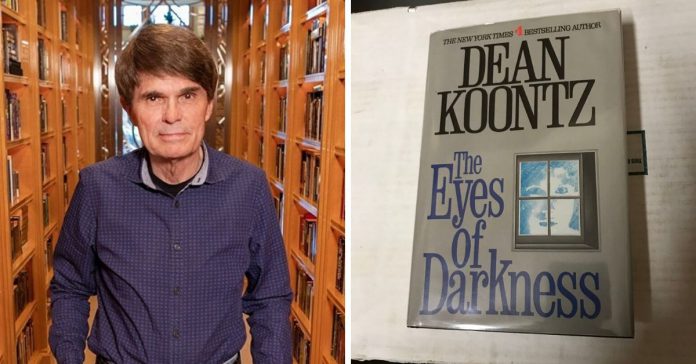 Did ‘The eyes of darkness’ written by Dean Koontz 1981 predict coronavirus? Well, in a widely shared post on social media, many felt that Koontz had already predicted a coronavirus epidemic. Even though the novel stands fiction, but the things suggested in the book certainly rings the bell.

In the book, a character called Dombey narrates a story of a Chinese scientist who brings biological weapons “Wuhan-400”.

“To understand that you have to go back twenty months. It was around then that a Chinese scientist named Li Chen defected to the United States, carrying a diskette record of China’s most important and dangerous new biological weapon in a decade. They call the stuff ‘Wuhan-400’ because it was developed at their RDNA labs outside the city of Wuhan, and it was the four-hundredth viable strain of man-made microorganisms created at that research center”, Dombey said. In fact, in a later paragraph, Dombey said that none of the infected survived. It read, “once infected, no one lives more than twenty-four hours. Most die in twelve. Wuhan-400’s kill rate was 100%.” Some curious fans freshly started pointing out a passage from the book, that discusses a virus called “Wuhan-400.” Especially, netizen claims he predicted decades ago this current outbreak, which has been traced back to Wuhan, China.

A Dean Koontz novel written in 1981 predicted the outbreak of the coronavirus! pic.twitter.com/bjjqq6TzOl

To be noted, in the original 1981 version of “The Eyes of Darkness,” the weapon was called “Gorki-400” in that Russian locality. The name of the weapon was changed to “Wuhan-400” when the book was republished in 1989.

Now the question arises, Did Dean Koontz really predict the current COVID-19 outbreak in his 1981 book?

Well, it’s true that the illness in his book started in Wuhan, but in the original 1981 edition of “The Eyes of Darkness,” this biological weapon was called “Gorki-400,” named after a Russian region. Indeed, a version of the book with a 1996 copyright calls it “Wuhan-400.” The current coronavirus outbreak certainly began in Wuhan, China. But adjusting the idea that the virus was invented in a lab is an imaginary theory that originated from false social media accounts. Lately, such claims were widely dismissed by scientists from both China and the West.

At present, scientists are still working to understand the exact source of the virus, but research indicates that it was possibly originated in bats and was carried to an intermediate host before jumping to people.

Similarly, Sylvia Browne also said to have predicted a global pandemic similar to the Coronavirus.

In her 2008 book, she wrote, “End of Days “In around 2020, a severe pneumonia-like illness will spread throughout the globe, attacking the lungs and the bronchial tubes and resisting all known treatments,” it said. “Almost more baffling than the illness itself will be the fact that it will suddenly vanish as quickly as it arrived, attack again ten years later, and then disappear completely.” Even though she died in 2013, the book shot up to No. 2 on Amazon’s nonfiction chart, and physical copies are now selling for hundreds of dollars.