MetroSaga
Home Sport 10 Instances Where Cricketers Went Way Beyond Their Injuries To Play For... Cricket is not just a game, its an emotion to many.  For some, cricket is a hobby, for some, it gives a personality trait. It is looked as if it is part of one’s own life. The beauty of this sport is that it can show human nature at its very finest, or its very worst.

Let us looks at 10 instances when cricketers showed tremendous commitment by braving horrific injuries to resume playing a match for their team.

Anil Kumble who was batting against West Indies at Antigua in 2002, was hit on the mouth by a Mervyn Dillon bouncer. He spat out blood and continued to bat, barely showing the immense pain he must have been in. After his innings, he found out that the jaw was fractured. Despite breaking his jaw, the veteran came out to field during West Indies’ innings. Moreover, he even went on to take the prize wicket of Brian Lara. 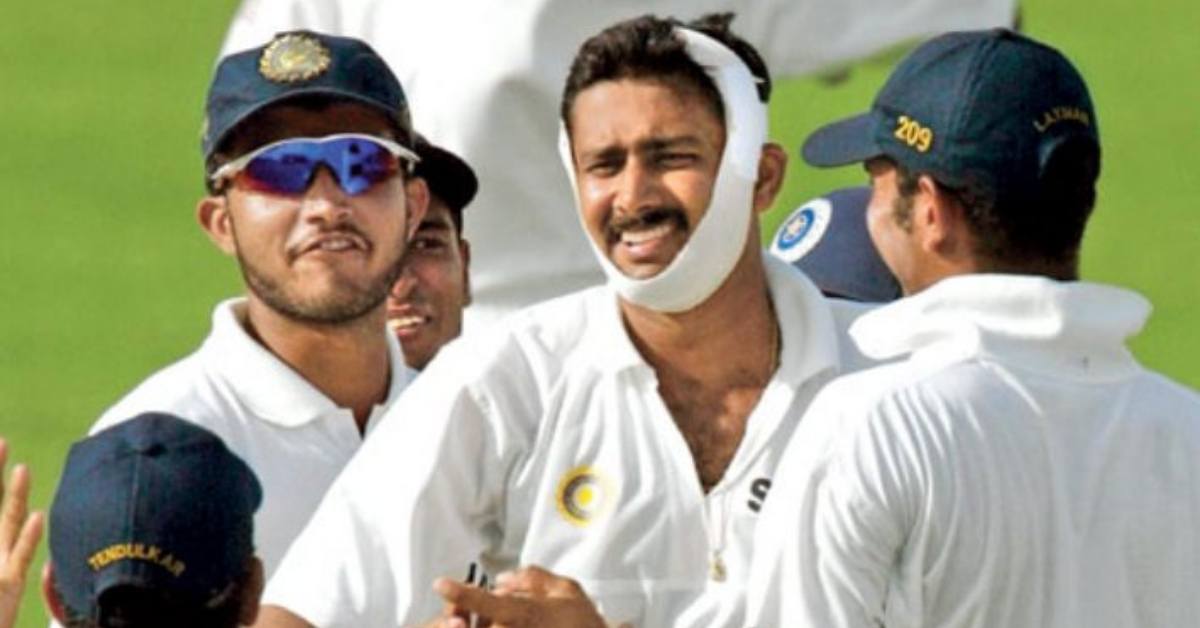 In a Newzeland vs. South Africa match back in 1953, Bert Sutcliffe was hit by a sharp bouncer from Neil Adcock on the side of his head. Sutcliffe was down and had to be rushed to the hospital. However, the left-hand batsman resumed his innings after coming from the hospital and also smashed 25 runs in an over off Hugh Tayfield and remained unbeaten on 80. Rick McCosker, an Australian opener faced the savagery of Bob Willis of England at the Centenary Test at the Melbourne Cricket Ground. The fierce bouncer struck him on his face which caused a broken jaw. The ball then rolled to hit the stumps, but he would have had to retire hurt regardless. After this incident, the Rick manage to come out and bat in the second innings in bandages. He made a crucial 25 runs and Australia pulled up the victory by 54 runs. In the Lord’s Test of 1963 between England and West Indies, Wes Hall bowled a fury that struck Colin Cowdrey on his arm. His arm was broken, and it looked he would be unable to continue. However, despite a broken arm, he came out to bat and saved the match for England against a world class bowling attack. Malcolm Marshall broke his thumb in two places on the very first morning of the Headingley Test of 1984. England would have felt they had a massive advantage over West Indies fast bowler. But nothing stopped this west Indian pacer to come out to bat and play with one hand. Some crucial innings which helped Larry Gomes score a century. Surprisingly he took 7 wickets in the same match rattling England top order. Shoaib Akhtar, bowling around the wicket pulled out a deadly short ball to the well-set Kirsten. The left-hander tried to play a pull shot, but it was late and was beaten for pace as the ball smashed his face. But the South African opener continued to bat without knowing he had a broken nose and went on to score 55. While diving to take a catch during RCB’s match against KKR, Virat suffered a serious injury on his left hand. He left the match for some medical help and came back on the ground with some tapes on his hand. Virat took 9 stitches on that hand. Despite having an injury, Kohli smashed 113 and added 147 runs for the first wicket with Chris Gayle as RCB posted a daunting 211 for 3 off 15 overs in a must-win game against KXIP in Bangalore. Wahab Riaz in the first innings against Srilanka of the second Test at Colombo was struck on the glove by a delivery from Dushmantha Chameera of Srilanka and suffered a hairline fracture. Well! this did not stop him from bowling nine overs for Pakistan. However, at the end of it, the pain was too severe and he had to be taken off the field. Shane Watson put his body on the line for Chennai Super Kings on Sunday and kept playing while blood poured through his trousers from his left knee. He smashed 80 from 59 balls but could not prevent the Kings from falling to a dramatic defeat at the hands of Mumbai Indians. The veteran Australian all-rounder required six stitches after his knees were left covered in blood as he attempted a quick two. Stuart Broad suffered a fractured nose after being hit in the face by a bouncer from Varun Aaron, on the third day of the fourth Investec Test at Old Trafford. His injury came when he tried to pull Aaron but the ball squeezed between his grille, striking him at the top of the nose and drawing blood. Therefore, despite his face being severely disfigured the man went on batting and then bowled his heart out to take England to a victory.