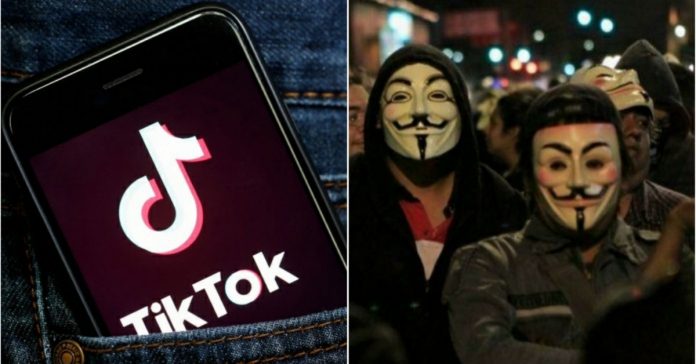 TikTok has had a rocky journey since its launch in India, however, this year has been particularly difficult, with the hatred for the app (the kind of content it promoted) and anti-China sentiments in the nation shrinking the ground beneath the Chinese viral video app.

Earlier this week, India went ahead and officially banned TikTok app, along with 58 other Chinese apps.

However, the app also had severe security issues that were revealed in recent reports that showed how TikTok had access to the device mic as well as the clipboard (on iOS14 beta), even when it wasn’t recording anything, which is surely causing discomfort among many.

And now, even the largest hacktivist group — Anonymous has gone ahead and asked people to uninstall the TikTok app from their devices.

Reported first by Forbes, this is being shared as a part of a massive campaign on Anonymous’s twitter handle.

It tweeted stating, “Delete TikTok now; if you know someone that is using it explain to them it is essentially malware operated by the Chinese government running a massive spying operation.”

Along with the tweet, the handle reshared a story on Reddit by Dan Okopnyi, an engineer who reverse-engineered the app, only to find multiple security and privacy issues.

According to the Reddit article, the app looks at device hardware, apps on the device, as well as GPS. worst of all, it is trying its best to hide the fact that it’s collecting this data, which definitely raises several concerns.

TikTok Remains Quiet On The Allegations

When Forbes contacted TikTok for a statement regarding these allegations, they didn’t provide with any comment to support or deny the allegations.

This, however, isn’t the first time Anonymous has gone against TikTok, previously it was against the platform when it saw someone misrepresenting the hacktivist group on the platform. Through the same Twitter account, it announced that the group has no official TikTok account, while also stating that,  “that is an app created as spyware by the Chinese government.”

Sure, we don’t really know how official this Twitter handle really is, as the article points out that the ‘Anonymous’ tag is being used by people who share the same ideas (resulting in copycat accounts) and there isn’t a body in place that officially looks into these things, yet it’s always to be safe than sorry.

US Supports India’s Ban On 59 Chinese Apps, Pompeo Says It Will Boost National Security And Integrity