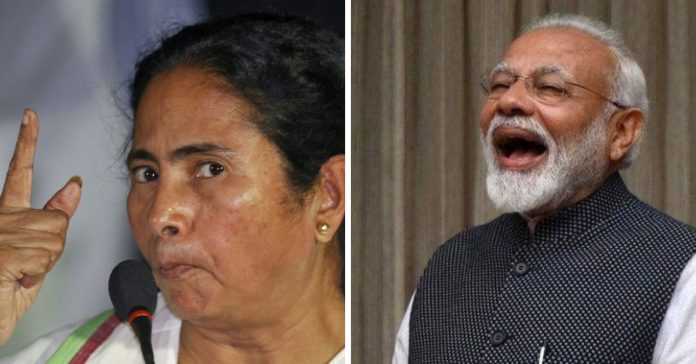 TMC MP Sudhangshu Sekhar Roy showing a coupon with a photo of Prime Minister Narendra Modi alleged that the BJP is giving 1000 rupees to people to get votes and also for making large turnout during the PM’s rally.

“This is shocking that the BJP is luring people through such coupons and the Election Commission is silent. They are asking people to attend PM Modi’s rally in exchange for such coupons. This clearly shows that they are losing this election,” mentioned the TMC MP claiming that the TMC delegation will complain to the Election Commission of this issue. “We came to know that BJP leaders in Raidighi in South 24 Parganas district are distributing rupees 1,000 coupons to lure voters. They are telling the voters that they will get rupees 1,000 if they vote for the BJP. Please be careful. It will be a sin to accept their coupon because it is their ill-gotten money,” claimed the West Bengal Chief Minister.

However, rubbishing the claims of the ruling party, BJP spokesperson Shamik Bhattacharya claimed that the TMC should first prove their claims.

“No one from the saffron camp is giving out any sort of doles to woo the voters. It is a shame that the TMC is trying to put their poll tactics on our name. They should prove their claims,” mentioned Bhattacharya.

It can be recalled that on April 3 West Bengal BJP on Saturday with proper evidence had complained to the State Election Office against TMC’s Sankar Kumar Naskar, candidate of Falta for distributing money at Sararhat More. Shishir Bajoria said that the TMC supremo slams the BJP without proof but the saffron camp always gives proof to suffice the claim.