MetroSaga
Home City Life Bhoo Varahaswamy Temple near Mysore is one of the Rarest Temples dedicated... Bhoo Varahaswamy temple is one of the unique temples of Karnataka dedicated to Mother Earth. Is the temple built for solving the land problems? Yes. You are right. Some devotees attribute their solving of land disputes in an easy way to this deity. The popular folklore is if you have a land dispute, and you go to this temple and pray to the Lord, the problems will get solved in an easy way. So, shall we go to further information about Bhoo Varahaswamy Temple in Mysore?

As for geographic details, you can find this temple in a simple village called as Kalhalli which is situated on the Hemavati river bank. Hailed by the residents and other folks as having mystic powers, it is very rare you see an idol of 18 feet, made of grey stone. Similar to Lord Narasimha temples, this place also has the Lord in a sitting pose. On his lap, is seated Goddess Bhoodevi. The height of the deity is 3.5 feet. You can also see an idol of Lord Hanuman. Will you believe that the Hoysala King Veera Ballala III built this temple? 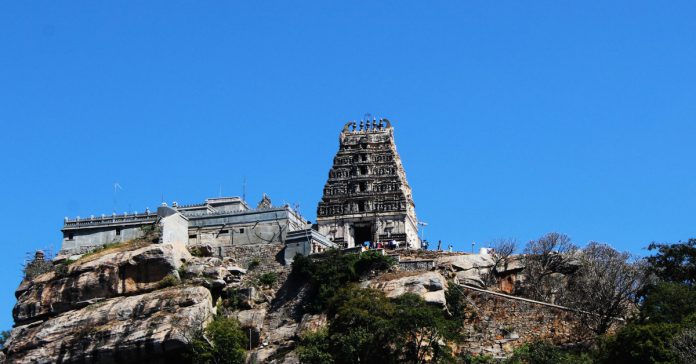 A Temple built of Grey Stone

The temple has been built according to the ancient Indian tradition. Built of grey stone, it has two units, the front hall, and sanctum. As per the history of the region, it is the place where the Great Sage Gautama performed rigorous penances. The king, who was hunting in the forest got lost. Resting under a tree, he saw a hunting dog running after a rabbit. After reaching a certain place, the rabbit, far from its timid nature, had become ferocious and was chasing the dog. At the sudden turn of events, the King believed that a magical power exists in the place. He had his subordinates dug up the place. The deity of Pralaya Varahaswamy was thus found. It was then, the temple was built. Come, any type of storm or floods, the temple has withstood them and survived to tell the tale. The deity has four hands. The left upper hand holds the conch, while the right upper hand has the Sudarshana Chakra. You find an Abhaya mudra on the other right hand and with the left hand, he embraces the Mother Earth.

So, have you read the article and are you interested to go to the temple? It is very easy to reach the location. The village is just 32 km from Pandavapura in Mandya. Buses, you can get in plenty, but they will reach just 2 km from the temple. You can either trek the road or you can hire an auto. But is it really necessary? You bet. The clean air and village background can work wonders for your health. From the bustling city life, your eyes have only watched cars, buses and swearing of others stuck in a traffic. Let them take a breather in the form of watching green fields, your lungs will get pure air and your ears hear the pleasant singing of the birds instead of the loud honking of horns in the Bangalore traffic.