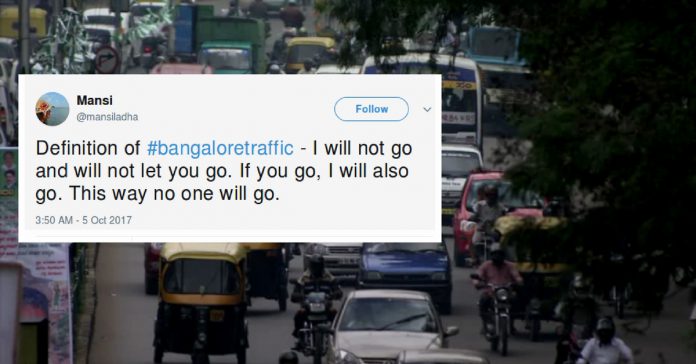 Bengaluru and traffic are like two bodies and one soul; inseparable. Hell with all the complaints and measures, traffic in the city is getting worse with time and it is only increasing. Thanks to IT revolution. Well, the city was not like this before but as it started growing, every other problem arose. Anyhow, if we have to travel in the city then we have to bear the traffic. Sometimes, the frustration level crosses its limits and all the anger turns to Sarcasm. We start trolling our own situation and laugh on that. So, when this happened on a public paltform like Twitter, the blend of frustration and sarcasm went to its next level. Take a look at few of the epic tweets when Bengalurians took traffic problems to twitter. Remember this. When you have nothing to do or if you are really feeling frustrated about Bengaluru traffic then check this hashtag #BengaluruTraffic on Twitter. Just for some good laugh and for a feeling that we all are stuck in the same boat.

Because I’m in a hurry.

I left for home in cab.On the way saw my neighbour walking& offered him a lift.He politely refused saying he is in a hurry#bangaloretraffic

Bangalore traffic + bangalore roads, the combination that will ruin your day.

There is a positive side to Bengaluru Traffic. Now you know.

Sometimes Bangalore traffic can work in your favor. #LastMinuteSlides pic.twitter.com/GCL3N5o1FK

Give this girl an Award. Please note the new definition of Bengaluru Traffic.

Definition of #bangaloretraffic – I will not go and will not let you go. If you go, I will also go. This way no one will go.

Did you get this?

When I’m stuck in Traffic and bored of getting bored.

Sad but true. Let us take this moment to thank the City Police of Bengaluru.

Bangalore traffic police does more road repair work than @BBMPCOMM1. Don't know whether to be happy or feel sad @CMofKarnataka

The sound of a royal enfield stuck behind you in a long traffic jam is the most irritating sound on road ever! #TrafficWoes #Bangalore

When in Bangalore, Do as Bangaloreans do.. Get stuck in Traffic jam #Bengaluru #TrafficAlert

I guess this might be in Silk Board Traffic.

Is there any alternative left?

People who travel everyday in bangalore traffic during peak hours – I salute you. Your patience level must be level 100000000000 #Bangalore

Frustrated and yet trying to be funny.

Stuck in Bangalore's traffic. Please pray that I don't miss my flight to Mumbai.

This is what happened when Bengalurians took Traffic problems to twitter. Funny, intriguing and frustratingly sarcastic.

Get the Best of Metrosaga delivered to your inbox. Subscribe to Metorsaga and never miss an update from us.

Finally! Funds are allotted to install Timers at Traffic Signals, much needed in Bengaluru

A Politician promises to Resolve Bengaluru Traffic If Elected, gets invited from Comedy Clubs to perform.