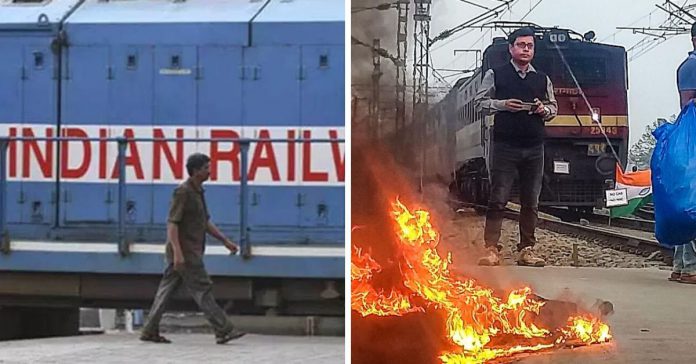 Indian Railways has made up a firm decision to not let vandals get away and wants the anti-CAA gang to pay for the damages that they have done to the stations, trains and surrounding areas.

On Monday, Railways Board Chairman Vinod Kumar Yadav said those who were a part of the violence done will have to duly pay for the losses that the Railways incurred. While property worth Rs. 80 crore was destroyed, the amount could also be more than Rs 80 crore. The last two weeks have seen trying times in the country with people charged up about the new CAA and NRC laws. Protestors were out on the streets asking the government to revoke the law. Violent incidents in New Delhi’s college Jamia Millia Islamia was one of the major enabling factors that created such a big stir.

The agitation turned violent and angry protesters vandalized public property, tried to hurt police forces and also set train stations and trains itself ablaze in order to make a point. This happened in many places in West Bengal and Assam.

In Sankrail Railway station, the ticket counter was set on fire and the Sujnipara station was destroyed by vandals. Several trains at Krishnapur Railway station was also set ablaze.
The same thing happened in Assam, Chabua, and Panitola. The Northeast Frontier had to suspend 40 major trains in their jurisdiction.

For the people who were involved in this type of violence, 85 FIRs have been lodged. Those who have been found guilty will be tried under Section 151 of the Indian Railways Act which has a maximum punishment of 7 years in prison.

Chairman Vinod Kumar Yadav said, “Law and order is a state subject and they are working on it. Recoveries will be made.”