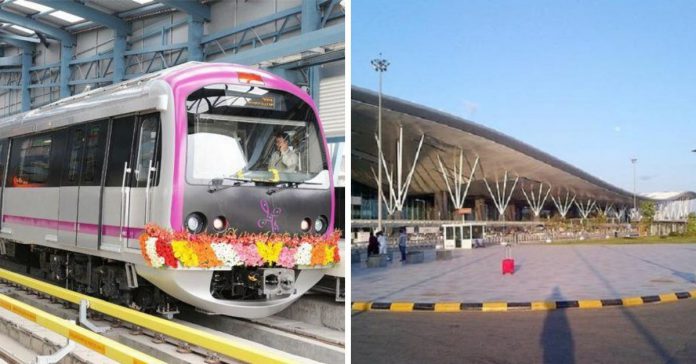 Bangalore Metro Rail Corporation Limited has stated that the airport metro line will have a ridership of 2.5 Lakh every day. The much-delayed metro line project is finally taking shape to provide a much convenient facility for citizens in Bengaluru.

The Airport Metro line will start from KR Puram and end its journey in Kempegowda International Airport followingly. It is said to be operational by 2023, having 17 metro stations amongst which Hebbal will also be connected. Hebbal metro station will alone have around 35,924 daily ridership, followed by KR Puram 32,818, Nagawara 27,945 and Airport terminal 21,132 ridership.

Hebbal is all set to become the busiest transport hub and this is because of easy city access routes that it provides, which includes BMTC bus deport, KR Puram-KIA Metro line and Hebbal-JP Nagar (phase 3) and suburban railway station and flyovers. Hebbal will also be the nearest metro station on this line from the central cities so that KIA-bound passengers from core city areas can travel without changing trains. According to a report, Bengaluru may also get an inner ring metro in the coming years as officials are all set to study the best way to beat the rising congestion in the core area. The planned underground metro line is said to be nearly about 35 km in length, that connects Sandal Soap Factory and Ulsoor via CV Raman Road-Jayamahal Road before reaching Wilson Garden via Domlur. The other half will connect Srinagar and turn right on Chord Road to complete the circle. BMRCL Managing Director Ajay Seth said the metro was not the only option for the core area, and they will get clarity on the subject after assessing the traffic study and feasibility of metro. Source

10 Things To Know About The Key Roles and Responsibilities Of...

10 Indian Temples And Their Prasadams – Taste And Divinity Straight...