MetroSaga
Home Movies A Huge Protest Broke Out Outside Ujjain Temple Ahead Of Alia Bhatt,... Alia Bhatt and Ranbir Kapoor were in Ujjain on Tuesday to visit Mahakaleshwar Temple but they were stopped by Bajrang Dal activists from entering the temple after the actor’s old interview on eating beef went viral.

Protest broke out at Ujjain's Mahakal Temple when Ranbir Kapoor, Alia Bhatt went for photo-op. Such was d anger that they had to run away without entering d temple premises.

U eat beef & glorify your beef eating on camera & think that Hindus can be fooled by photo op at temple? pic.twitter.com/o7SSukhejl

An activist said Ranbir Kapoor made degrading comments on ‘gau mata’ as he has said beef eating was good. “We won’t allow them to enter the Mahakal temple. We were only showing black flags, but police charged at us,” he said.

Ujjain: 'Anti-Hindu' Alia Bhatt and 'Beef eater' Ranbir Kapoor Could not defile the Mahakal temple after the uproar by Hindu Lions .

Imagine the uproar when all the Hindus from round the corner will stand united.#HarHarMahadevॐ 🙏🚩 pic.twitter.com/RZTgNLScIr

Witnesses said despite the cane charge by the police, the protesters did not allow Brahmastra actors Ranbir and Alia to enter the temple premises. Bajrang Dal workers raised ‘Jai Shriram’ slogans when Ranbir and Alia arrived at the spot to take darshan. 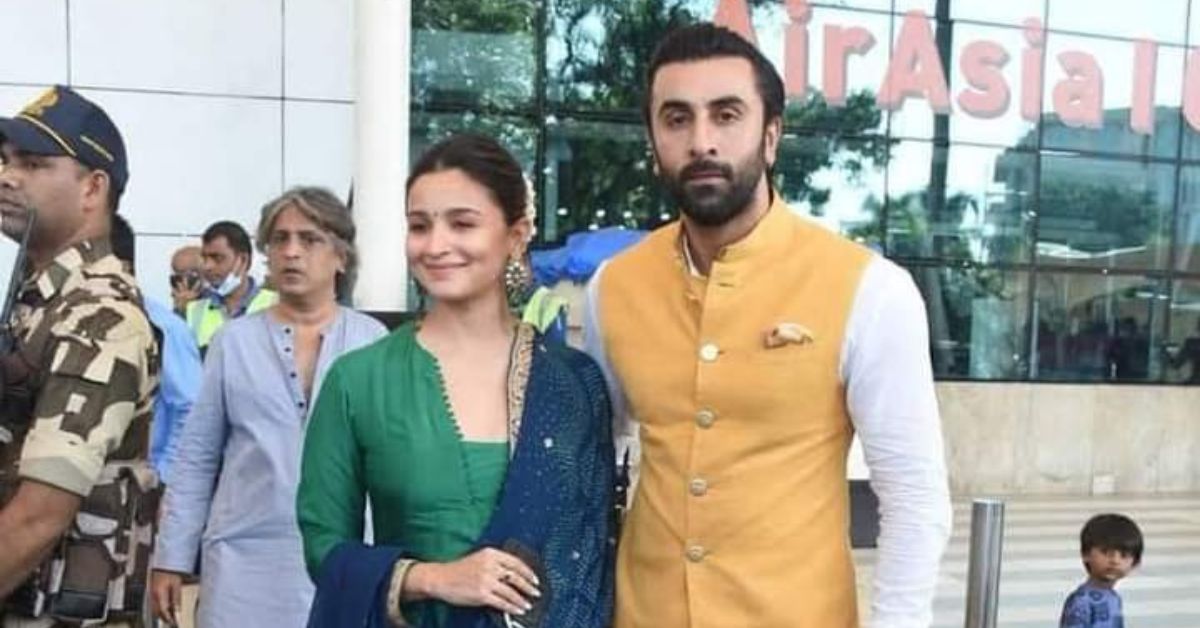 In the video, a Bajrang Dal activist said that they were peacefully protesting against the actors with black flags but the police started cane-charging them.

Team Brahmāstra along with #AyanMukerji are in Ujjain to visit Mahakaleshwar Temple.

After Alia shared the video on Instagram to inform about team visit at Ujjain, protesters reached their with Black flags pic.twitter.com/TilxMMQwuE

After promoting the film Brahmastra in Mumbai, Chennai, and Hyderabad, the lead actors of Brahmastra had taken a flight to Ujjain hoping to visit the Mahakaleshwar Temple along with director Ayan Mukerji.

The protest erupted after an old interview of Ranbir Kapoor came to light where he said that he loves to eat beef. During the promotions of Rockstar, in 2011, he said, “My family is from Peshawar, so a lot of Peshawari food has come with them. I am a mutton, paya, and beef fan. Yeah, I am a big beef fan,” he had said.

The old video has resurfaced ahead of the release of Brahmastra and Ranbir Kapoor is being called ‘beef guy from Peshawar’ by the ‘boycott gang’.

Since Alia Bhatt is pregnant, the couple decided not to go to the temple amid the unrest. Alia Bhatt and Ranbir Kapoor returned to Indore without darshan. From Indore, they will take a flight to Mumbai, said Ashish Singh, the Collector of Ujjain.

The 'Beef Guy' Ranbir Kapoor, his arrogant wife Alia Bhatt & the confused 'Brahmastra' director, Ayan Mukherjee were booted out of Ujjain's Mahakal temple by the protesting hindus there. The trio escaped b4 completing their temple run.👇#BoycottBramhashtra #CulturalGenocide pic.twitter.com/Wm1rhwenHd

Leaked Video From Brahmāstra Shows SRK In This Particular Role, Twitter Is Shocked

Ranbir Kapoor Reveals He Would Have Loved To Do This South Indian Movie, He Even Made The Iconic Gesture

A Huge Protest Broke Out Outside Ujjain Temple Ahead Of Alia Bhatt, Ranbir Kapoor’s...

Movies karthikrocks36 - September 7, 2022
Alia Bhatt and Ranbir Kapoor were in Ujjain on Tuesday to visit Mahakaleshwar Temple but they were stopped by Bajrang Dal activists from entering...

Movies karthikrocks36 - September 7, 2022
After giving some of the most iconic films of Indian cinema across languages, Mani Ratnam is all set to treat audiences with a historical...

Business karthikrocks36 - September 7, 2022
Former chairman of Tata group, Cyrus Mistry was killed in a road accident in Palghar near Mumbai on Sunday. As this incident has shocked...

City Life karthikrocks36 - September 6, 2022
Several IT Companies in Bengaluru are being called out for asking people to report to the office despite the floods. No WFH? India's Silicon city has...

City Life karthikrocks36 - September 6, 2022
The news today is all about the rains that lashed Bengaluru last night. The entire city is waterlogged and the authorities are having a...

City Life karthikrocks36 - September 6, 2022
When an overnight downpour led to a crisis-like situation in the country’s IT hub, Twitterati did not hold itself back and started reacting to...

City Life karthikrocks36 - September 6, 2022
Many roads in Bengaluru were submerged into the water and this prompted many employees of IT companies living nearby to ride tractors and JCB...

Movies karthikrocks36 - September 6, 2022
Brahmastra is touted to be the costliest Bollywood film ever made. The film is just days away from its theatrical release and the pre-release...

City Life karthikrocks36 - September 6, 2022
Bengaluru was once called the city of Thousand Lakes. Can you believe it? Today, the problem has become so worse that even in imagination,...

City Life karthikrocks36 - September 6, 2022
A 23-year-old woman died due to electrocution after slipping on a waterlogged road in rain-hit Bengaluru. Her death has triggered a wave of outrage...

City Life karthikrocks36 - September 6, 2022
As heavy rain brought Bengaluru to a standstill, Telangana Minister KT Rama Rao has sent out a message to those mocking the IT hub....

News karthikrocks36 - September 6, 2022
Palki Sharma Upadhyay, Managing Editor of WION quit the media outlet on Saturday. After her exit, rumors are coming in that the star journalist...

Movies karthikrocks36 - September 1, 2022
Liger producer Charmme Kaur said that the underwhelming response to Vijay Deverakonda's Liger and the success of Karthikeya 2 is quite confuing. She is...
Advertisements