Kannada with the pride of being one of the oldest languages of the world has numerous interesting things in its womb. The state language of Karnataka and the heart language of Kanandiagas is well-known for its heritage from the time of Ranna and Pampa. From Kuvempu to Kambar, from Dr.Rajkumar to Pandit Bhimsen Joshi, from Gubbi Veeranna to Shankar Nag, we have seen the eminent personalities who have put Karnataka on the global map. You might have read or heard so many things about Karnataka and Kannada but still, the language is so affluent that there are some stories left unsaid and unread. Come let’s know some unknown things about Karnataka and Kannada on today’s read.

Did you know that Rava Idli was first prepared in Karnataka? During the world war 2 when there was a lack of rice to prepare the idlis, MTR used Semolina instead of rice and in that experiment we got this delicious breakfast item called Rava Idli.

We also have a pride of introducing the epic Masala Dose to the world and today we see it’s different varieties being prepared in other parts of the country. From Raagi Mudde, Chitranna, Jolad Rotti, Paddu to Mirchi Bonda and Mysorepak, the taste of Karnataka cuisine makes you die for it. Karnataka is one of the biggest Coffee exporters of India

With Bababudangiri, Kodagu, Chikmagalur, and Hassan, Karnataka is the darling state when it comes to coffee exports in India. It is said that Tirupathi and Amritsar are the most crowded religious places in India but Kukke Subramanya of Karnataka has found equally a large number od devotees following. From celebrities to a common man, people visit Kukke to cure their Sarpa Dosha. The Land of Five Rivers

We all know Punjab as the state of five rivers but what if we say that Karnataka has a city of five rivers. Yes, Vijayapura (Bijapur) has many rivers and streams passing through it, including Krishna, Bhima and Doni rivers.

Engineer’s Day is celebrated in the memory of a Kannadiga

The one name that gives us goosebumps all the time and the one name that is worshiped in the Mandya and Mysore parts of the state is the Great Sir M Visweshwariah. The man behind the KRS dam and many other marvels is the proud Engineer from Karnataka. Karnataka has over 406 tigers. No.1 in the country

As per the National tiger census report of 2014, Karnataka is the only state in India which has the highest tiger population.

“The southern corridor has contiguous forests, which is a very good tiger habitat. The increased protection and conservation seen over the past decade have started paying the dividend,” said Ravi Ralph, Principal Chief Conservator of Forests (Wildlife). 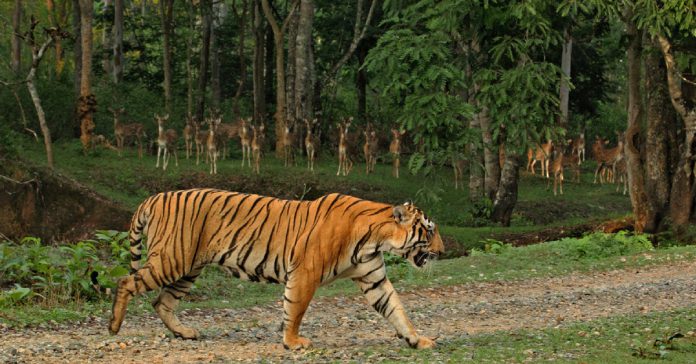 The Oriental Research Institute of Mysore is State’s pride

Being one of the oldest libraries in India, the oriental research institute of Mysore has the oldest manuscript of Chanakya’s Arthashastra. The dynamic Shankar Nag was the first Indian director to shot an underwater scene for the movie Ondu Mutthina Kathe. The movie with the legendary Dr.Rajkumar in a lead role portrays the story of a fisherman being trapped in a pearl deal. If you don’t know, the veteran actor Naseeruddin Shah came as the first choice for the lead role but Shankar Nag wanted Dr.Raj to act for him.

Recommended: 12 Reasons Why Shankar Nag is still a Superstar in Karnataka Today, we know Maniratnam as the Star director with movies like Roja, Dil Se, Bombay, Iruvar, Guru and other blockbusters to his fame but his first ever feature film was a Kannada movie titled Pallavi Anu Pallavi. Also, it was the first movie for Anil Kapoor in a lead role.

Mysore Paints and Varnish Limited located in Mysore is the only authorized centers having rights to manufacture the indelible black ink used to cast vote during Elections in India. It is in Karnataka the first ever private Radio station was set up in 1935 by Professor MV Gopalaswamy.

Jnana peeta award is an Indian literary award presented by the Bharatiya Jnanpith honoring an author for their ‘outstanding contribution towards literature’. Interestingly out of 51 people having won this award across the nation (till 2012), Hindi has bagged the most number of awards (9 awardees). Kannada is close at second position with as much as 8 awardees. Dr.Rajkumar is the only Indian Superstar to have won the National Award for the Best Play Back Singer

Dr.Rajkumar, the stalwart of Kannada Cinema is the only Indian superstar to bag the National Award for the best playback singer for ‘Nadamaya’. Surprisingly the actor has never won a National award for acting which is quite unfortunate. It is said that the actor has bagged one for ‘Santha Thukarama’ movie but we are not sure about it. Pingali Venkayya is the proud freedom fighter to design the Indian National flag and Karnataka Khadi Gramodyoga Samyukhta Sangha in Hubli is the only unit in India that has an official permission to manufacture and supply Indian flags. We applaud Rani Jhansi Lakshmi Bai’s name as the first women warrior to protest against British but history says that Kittur Rani Channamma of Karnataka was the first brave lady to face British in the war field.

Mysore palace – The Second most visited tourist spot in India

The Beautiful and alluring Mysore palace is the most visited tourist spot in India, second only to Taj Mahal. If Taj Mahal is an epitome of love then Mysore palace is an exemplification of Karnataka’s culture and tradition. Can you see a Kannada letter ‘V’ in the logo? Kannada is the only Indic language represented on the globe. Isn’t it a proud thing to share? Few other things to know

So these were a few Awesome things about Karnataka and Kannada. So how did you liked this? If you know any such interesting things about Kannada and Karnataka then please let us know in the comments below.

Karnataka Will Ban The Use Of Firecrackers This Diwali: CM BS Yediyurappa

This Floating Church In Karnataka Will Surely Amaze You