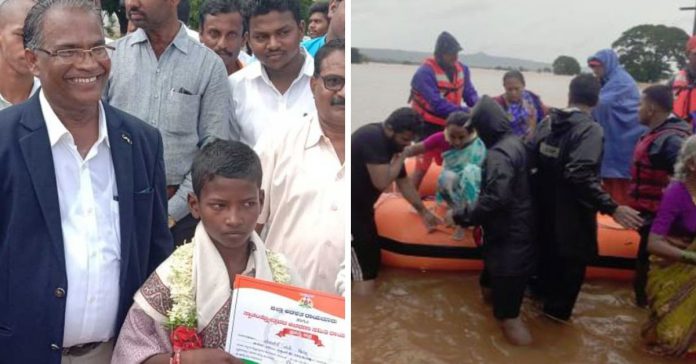 As almost half of the country is fighting to evacuate people trapped due to floods in various states, rescue operations are being conducted in a massive way by the NDRF, CRPF and local people. And in such a dire situation there are many volunteers and localities who have come forward and are doing an outstanding job to help the people trapped in the flooded areas.

A 12-year-old boy from Karnataka attracted national attention when he risked his life to guide an ambulance moving through a submerged bridge. While speaking about his extraordinary effort, Venkatesh says, “I saw the ambulance driver’s worried face and told him I’d guide him on the bridge. I ran across through the water kept rising but ensured the ambulance reached the other end.” This boy from class 6  ran over 100m water in the pouring rain so that the ambulance carrying six children reached safely to its destination.

In his narration, Venkatesh says, “Around 11 am Saturday, I had gone to the bridge to see the water level and saw an ambulance waiting. The driver didn’t know the depth of the water as the bridge was overflowing. He was taking six children to the hospital. I told him I’d run across the bridge and that would help him gauge the depth of the water. I ran as fast as I could and at one point the water rose above my chest. I know how to swim and therefore confident of making it across. The driver followed me and reached safely.” The resident of Hirerayanakumpi village in the Devadurga taluk of Raichur district is receiving appreciation from everyone across the country. His bravery has impressed the IAS officer Manivannan who has already referred Venkatesh’s name to the Women & Child Development Department to honor this young boy with a bravery award.

According to the brave boy’s brother Bheemaraya, there were many people who were present on the spot where it all occurred but only Venkatesh showed the guts to take the risk. Interestingly, none of the family members of Venkatesh knew that their boy had done such an extraordinary job by risking his life. They came to know when the clip was aired on television. Beemaraya said his mother Devamma was initially shocked and scolded him but later on appreciated him.

Road Thrill Bengaluru: Wear Your Pride And Ride On This Republic...

8 places you should not miss for an Amazing North Indian...

Five Things You Should Consider Before Building a House