We all know and have heard a lot about Metro Trains in Bengaluru popularly known as “Namma Metro”. Being the easiest and the most convenient mode of transportation in the city, Metro Trains are saving most of our travel time thereby minimizing the hassle of moving and waiting in the traffic.

The 10 must know facts about “Namma Metro” for you. Read on. It is said that this is the first underground metro line in South India comprising of Purple line and Green Line. The Purple line connecting the route from East to West Bengaluru began it’s operations on April 30th, 2016 whereas the green line connects North to South Bengaluru.

BMRCL and its Joint Venture Metro Construction is happening under BMRCL ( Bangalore Metro Rail Corporation Limited ), an agency which is a joint venture of Government of India and the Government of Karnataka 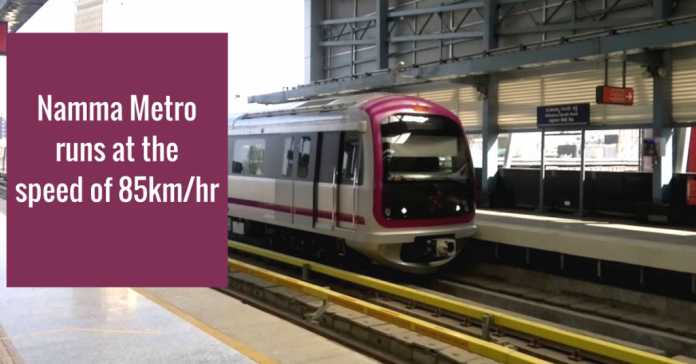 The Purple line that initially connected Bayyapanahalli and M.G Road was a stretch of 6.7 km got inaugurated on October 20, 2011. Later, it went on to connect Mysore Road and Magadi Road and finally to form the first underground corridor from Cubbon Park to Bengaluru City Railway Station completing the 18.22 km stretch of the Purple line.

Wait is over for Green Line Green line and it’s Phase 1 is divided into Reach 3, 3A, 3B, 4 and 4A and a trial which is in operation now connects Mantri Mall and Nagasandra. The Southern Part of the route after Majestic is aimed to complete by December, 2016 as per the project Guidelines.

There are two Under ground Corridors UG1 which is a stretch of 4.8 km from Cubbon Park to City Railway station is in function now. UG2 in the Green line from Majestic to K.R Market (4 km) is under construction.

Unknown Phase 3 and a long wait Phase 3 of Metro that will be connecting Bengaluru International Air Port to Bengaluru City is still in a plan that will begin it’s Construction soon.

Standard Gauge trains provide more space for standing inside the train and has less seats. Rain Water Harvesting system is implemented along the metro line and the harvested water will be reused to charge ground water. It’s an Initiative by Namma Metro to save the rain water.

Metro runs at the speed of 85km/hr

The maximum speed of Metro in Bangalore is 85 km/hr however the normal speed with which the train moves is 65 km/hr. Thank you for reading. Subscribe to Mojohook for more updates. News Akarsh HP - April 1, 2020
0
In a shocking incident, 100 people gathered for a religious congregation at the Rajasthan’s Ajmer Dargah as the country struggles to adhere to the... News Akarsh HP - April 1, 2020
0
Maulana Saad, the head of Nizamuddin Markaz reportedly refused to budge to the orders of Delhi government to vacate the Banglewali Masjid after it... News Akarsh HP - April 1, 2020
0
As China begins to relax the lockdown across the country, on Wednesday, the Chinese health authorities directed medical fraternity to start testing for asymptomatic...